Does the missing link try to befriend humanity or destroy it?

Scotty simply wanted to find the missing link, evidence of a version of man between the apes and the humans we’re more familiar with to better explain evolution. After a great deal of research, as seen in 1960’s TALES TO ASTONISH #12 by Stan Lee and Jack Kirby, he discovered that the evidence might lie in the far-off land of Borneo.

After remembering a college lecture on the missing link and gathering some of his fellow scientists, Scotty headed to the island nation where they intended to find the being’s bones. Instead they’re informed by the locals that the creature—dubbed Gorgilla—somehow still lived!

The enormous creature didn’t take long to attack the interlopers. Scotty did his best to distract the creature from killing his fellows, but in the process they found another impressive discovery: the presence of a T-Rex! Instead of teaming up to dine on fresh human, the two monsters came to blows with Gorgilla walking away the victor. At that point, he left Scotty and company alone. 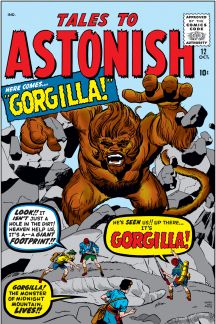 “Some instinct, some sixth sense must have told Gorgilla that we are related!” Scotty posited. “Though separated by millions of years of heredity, he is more man than beast!” With that, the scientists decided to leave the weakened creature to his home and returned to their own.

Not long after, in the pages of TALES TO ASTONISH #18, Gorgilla made his way to New York City in search of human companionship. Misunderstood almost immediately, the massive man-thing wound up rampaging through the city, bursting through the diamond of a baseball game, and climbing the Statue of Liberty before falling to his apparent death.

Gorgilla appeared again in DEFENDERS #1 from 2001 alongside many other classic Marvel Monsters and then again in 2005’s MARVEL MONSTERS: FIN FANG FOUR. As Mr. Fantastic explained, they shrunk the captured Gorgilla down to human size. Since his size presented the main problem, he scored a job as a window washer. He also joined Fin Fang Foom, Elektro and Googam to take on Tim Boo Ba!

Next time kicks off with the debut of the menacing alien mental manifestation known as Trull in the pages of TALES TO ASTONISH #21!