A visitor from beyond the stars succeeds in uniting sworn enemies!

Stan Lee and Jack Kirby came together once again in 1961 to stir up trouble in TALES OF SUSPENSE #21 when they created Klagg. In this case, the mysterious alien didn’t land and immediately claim he intended to dominate the planet. Instead, he agreed to hold meetings with representatives from all around the planet, including the “Iron Curtain Countries.” Before long, Klagg explained that he had been traveling nearby and simply intended to get his bearings without knowing the planet held life.

Everything moved along smoothly until Klagg explained that his craft harnessed the power of wind to propel itself through space. This of course garnered immediate interest from both sides fighting the Cold War. This exchange revealed to the visitor that Earth still waged conflicts between its own nations. He then explained that his race made it their business to squash warmongering worlds in creative ways from making them sleep for a thousand years to planet shrinking.

Klagg then ran to his ship and started using its impressive wind abilities to wreak havoc. The turbines proved so powerful that missiles fired at his ship were actually blown out of the air.

While Klagg fought with government forces, a young man named Phil decided to infiltrate the ship one night, grab the plans for the wind-generators, and painted a target on himself for foreign agents who wanted the same plans. Once they sprang upon the youth, Phil revealed the truth: that he had no plans, but that the Cold War continued to rip the planet apart and should be ended so they could focus on their true enemy Klagg. 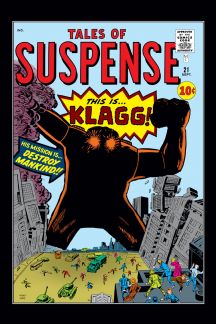 With petty differences forgotten and put aside, the world’s military forces all joined together to stop the invasion. Seeing this, Klagg ceased his attack saying, “I do know that by banding together you’ve shown me you are not hopeless savages.” With that, he left the planet in hopes that we’d move further towards peace and progress.

This story marks an interesting occasion where the image on the cover doesn’t completely represent that creature seen in the first story. Though mostly covered in shadow on the book’s front, you can see it’s an orange figure of some sort. In the story, the human-sized Klagg matches that color, but his giant, humanoid ship looks more blue aside from the opening splash when it’s red. Still, the actual visage of Klagg remains an impressive and memorable one to the point that it’s popping back up in MONSTERS UNLEASHED!