Deep in Africa, what secrets does this craggy creature hold!

How can a flip comment from a young girl lead to the discovery of a massive monster in a remote African village? For the answers, you must turn to the story of Kraa the Unhuman in the pages of TALES OF SUSPENSE #18. In this Stan Lee-Jack Kirby tale from 1961, a teacher overhears one of his students commenting that he’s never been outside of their small town during a lecture on African sculptures. Spurred on by the young woman’s words, he decided to take a trip that summer.

Once in Africa the teacher sought out the Wabuzi tribe to find out “why they’ve been making so many statues, all of the same grotesque figure!” The journey itself proved fraught with danger as other tribes refused to help him get there, mysterious strangers robbed him, and everyone whispered of angering Kraa.

Undeterred, the man carried forth, even when the presence of larger statues and huge footprints in the Earth would have made others turn back. Upon arriving in the Wabuzi village, he saw the giant, stone-like Kraa for himself, but the creature saw him as well and sent the villagers after the intruder.

Quickly captured, the man found himself held in Kraa’s mighty grasp about to die. However, being somewhat merciful, Kraa offered him one last request. Remembering why he came there in the first place, the teacher asked about the giant’s origins. 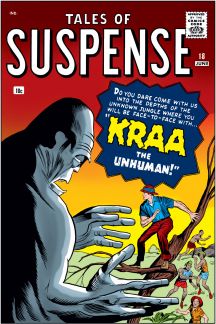 Instead of coming from the skies, Kraa started as an average villager who became stranded in a hunting trap after some Russians parachuted in and decided to use the area for nuclear tests. Caught in the blast, the man who became a monster grew to such impressive heights that he easily caught a leaping lion who wanted him for breakfast. Upon revealing himself to the villagers, the new life form was dubbed Kraa and asked them to look for the invaders who proved either dead or gone. With that, he dedicated himself to destroying all of the civilized world.

Instead of seeing a would-be conqueror in front of him, the teacher saw Kraa for what he really was: a man suffering from radiation poisoning. Unable to admit this in front of his worshipers, the man-monster had just lived with the pain for months, but the teacher applied ointment up a desolate mountain. There, an enormous python attacked the traveler, but Kraa stepped in to wrestle it away from his new aid. The two tussled, but ultimately tumbled off a cliff, both apparently dying in the process.

Back home, the teacher’s students didn’t believe his wild stories about visiting the Wabuzi tribe. That is, until one of them ran in with a newspaper emblazoned with a picture of a new Wabuzi monument, this one looking exactly like their teacher!

Kraa’s another one of those old school monsters who made a big splash with his first appearance, but then remained quiet over the decades aside from brief appearances in NICK FURY’S HOWLING COMMANDOS and, most recently, the third issue of MONSTER’S UNLEASHED.