An escaped con uses an experimental suit to go on a rampage!

We’ve covered quite a few classic Stan Lee-Jack Kirby monsters, but Metallo here holds a special distinction. So far, he’s the only creature to only appear in his debut story and then not again until MONSTERS UNLEASHED!

Metallo debuted in 1961’s TALES OF SUSPENSE #16. In that story, felon Mike Fallon broke out of prison, stole a car, and headed to a big city to blend in. Worried about too many cops in the area, the con applied for a radiation test suit experiment. Looking like a more aerodynamic and bulky version of Tony Stark’s first armor, the radiation suit supposedly allowed the wearer to survive a nearby atomic blast. After a week of training in the contraption, Mike stood on a deserted island, ready to test the suit against an underwater nuclear explosion.

The ensuing tidal wave flooded the small island and sent the suit underwater, but Fallon stayed safe, encased within the armor. Of course, the ocean depths boast their own dangers and he soon found himself fighting off an octopus. After killing the creature, Mike found salvation in military frogmen diving in to pull him up. 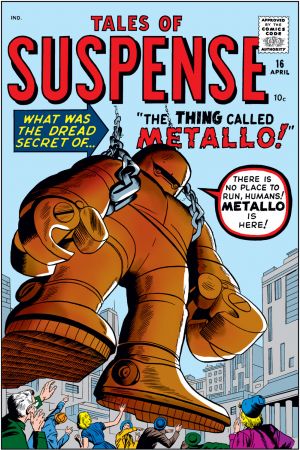 The next experiment found Mike suspended in the air with an atomic warhead blowing up about 50 yards from him. After walking away unscathed, Mike decided to keep the suit, reveal his true identity and get back to “the business of crime.” Lacking any kind of fail safes—the suit locked from the inside—the military men just stood and watched as Mike lumbered off with their lead behemoth. He made the First National Bank his first target, bursting his way up into the building through the sewers, dubbing himself Metallo in the process.

Metallo then decided to try his hand at a prison break from Alcatraz. After smashing into the island fortress he started feeling sick and went to the infirmary where the doctor informed him that he might have radiation poisoning. Mike quickly realized that, in order to receive treatment, he’d have to come out of the suit, which would most likely lead to another incarceration. Loathe to that idea, he instead wandered off into the mountains, contemplating his last days on the planet.