A creature arises from its slumber in the darkness of the Black Swamp!

The next Jack Kirby-Stan Lee creation we’ll look at sprang from their inimitable brains in 1960’s TALES TO ASTONISH #11. This one, dubbed Monstrom, was just minding its own business a thousand years ago when it sank into what would become the Bayou’s Black Swamp. Cut to modern times—by which we mean 1960, of course—and a novelist named John from up north moved his family to the edge of the very same Black Swamp in order to absorb some “local color” and work on his next book much to the chagrin of the locals.

One day, John and his wife Sara realized that their son Billy had wandered out of earshot, so the writer took his gun and headed into the swamp. After he finally stumbled upon the boy, they both came face to face with the recently returned Monstrom!

The creature not only took a blast from John’s shotgun without slowing down, but also easily wrestled away an alligator that chomped on its leg. Still, John and Billy had enough time to get Sara and hop in the car, racing away just as Monstrom’s enormous orange foot came crashing down where the vehicle had stalled a moment before. 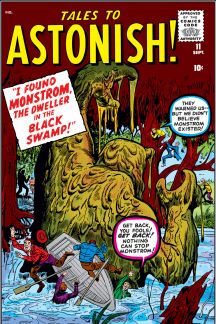 Racing into town, John tried explaining the beast to the sheriff, but they didn’t believe him until a local man came running up talking about a similar creature. They set up a barricade, but Monstrom easily stomped his way through.

The situation looked hopeless until a stray lightning bolt took out some nearby power lines and the creature violently reacted to the resulting fire. Lighting torches, John and the townspeople chased Monstrom back towards the murky waters from which it rose and it returned to its state of underwater sleep.

In the last panel, John imagined that the creature returned to the water so that it could come out at a later date when humanity might be able to not only understand it, but also help it rebuild its spaceship. Until that day, Monstrom will simply wait and wonder when people will advance to a place of compassion and intelligence not yet reached.

Googam, son of Goom, follows in his father’s footsteps as the younger alien plots and plans to enslave humanity!