A monster with familiar origins spouts a unique plan!

1961’s TALES TO ASTONISH #23 introduced readers to a monster with somewhat familiar origins, but a fun new plan to dive into.

Moomba may come off as a kind of greatest hits monster in that he’s an alien from a tree-based planet, like Groot, who also happens to be the subject of statues carved by those who live near his location in Africa, like Kraa. However, Moomba earns all kinds of originality points for the specifics of his plans to dominate the Earth.

Instead of an insulted professor, this story focuses on a human hunter by the name of Frank. He wanted to kill animals, but his exporter friend explained that the only thing anyone actually wanted to buy was sculptures. Though not excited about the job, Frank went into the jungle to find “weird tribal carvings” as he called them. During his journey, people tried warning him of the dangers of messing with the wooden statues, but the great white hunter sallied forth. 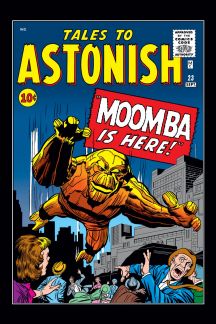 Ignoring the blatant fear of his horse, Frank searched for the source and soon came face to face with a 20-foot statue of Moomba. The hunter planned on cutting the piece into parts and then nailing it back together, but that idea took flight when Moomba tried stomping on the surprised man. The topic of conversation then turned to Moomba’s alien origins and how he planned on taking over the world. See, he didn’t travel to Earth alone; he came with an army that disseminated itself across the planet in the form of exported tribal statues!

To show Frank his plan in action, Moomba easily traversed Pygmy country and climbed a mountain for a good point of view. As he sent out the signal, the alien creatures sprung to life, attacking anyone nearby. Moomba exhibited his own superior strength as he took on the military while his minions did their part all across the globe. However, the invasion came to a halt when a witch doctor hit Moomba with a dust that froze him where he stood and diminished his mental capacity. The shaman then offered the monster an ultimatum: leave with his soldiers or allow the powder to render him inert.

Moomba agreed, erased the memories of the events from human memory, and then joined up with his fellow aliens, turned into a rocket and blasted off towards home. However, Frank remembered because he wrote about the events in his diary. If nothing else, he walked away with a newfound, though begrudging respect for native people.