Humanity puts itself in peril by failing to offer proper hospitality!

While many science-fiction stories feature human heroes overcoming great obstacles in the form of massive monsters, not all of them feature humanity in such a glowing fashion. Take the story of Oog from 1962’s TALES OF SUSPENSE #27 by Stan Lee, Larry Lieber, and Jack Kirby for example.

A scientific expedition to the Arctic uncovered a huge surprise: a large creature under the ice. The scientists began chipping away at the ice to the point where they could remove the creature in a block of ice and head back to the United States. He would have stayed that way for longer had a janitor with the sniffles not upped the heat.

Freed from the ice and confused, Oog broke loose. Seeking space to move he stumbled out into the streets where people immediately reacted with fear. Before long, soldiers aimed weapons at him. To avoid bloody confrontation, he used his mental abilities to hypnotize those nearby.

As jet planes scrambled to destroy the creature, Oog once again utilized his mental abilities. The thing from another world explained that, many years ago, his ship crashed into the ice. Unable to escape, he tried sending out a message of distress that failed. 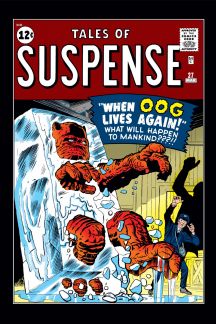 “Why do you fear what you do not understand?” he asked humanity. “Why should I wish to harm you? You are one step removed from savages! You are beneath my notice!” Further chastising his oppressors, he added that, given their ill treatment of him, other alien races would quarantine Earth as it offered nothing that any of them would want.

As he finished his lecture, he sent up another mental beam for his people to pick him up. The ship arrived immediately following and retrieved the survivor without even acknowledging the assembled humans.

The craft departing, one of the observers noted, “For years we have lived in fear of an alien invasion from outer space—but now we know there is one thing worse than invasion…and that is—contempt!”