Even the most menacing of monsters can turn over a new leaf and become a hero!

1961’s STRANGE TALES #90 unveiled the Stan Lee-Jack Kirby creation Orrgo to the world. The tale started with Orrgo and his people watching Earth, commenting that just one of them could easily overtake the whole planet. Without hesitation, the alien transported himself across the vastness of space with but a thought, landing on Earth in the middle of a circus. Exhibiting vast mental abilities that could toss cop cars around like candy wrappers and make trees come alive to do his bidding, Orrgo seemed likely to carry out his threat of world domination even before hypnotizing every human on Earth!

The fatal flaw in his plan came when Orrgo returned to the circus and took a nap leaning against the tree. He failed to take over all the minds on the planet, meaning that the circus’ gorilla—who hungered thanks to his master’s hijacked mental state—freed himself and seemingly killed the alien! 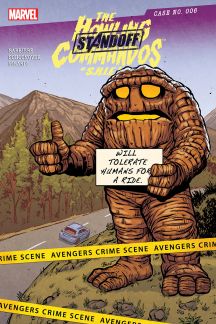 That demise didn’t quite stick and Orrgo returned in the pages of DEFENDERS which allowed him to eventually take part in the Howling Commandos of S.H.I.E.L.D. team that starred in its own six issue series last year. Not one to get his hands dirty anymore, the giant alien actually acted as the group’s intel man, guiding their operations from the home base. Eventually, he found out too much about the nefarious Dr. Kraye who sent Orrgo along to the top secret S.H.I.E.L.D. prison dubbed Pleasant Hill.

As seen in the pages of HOWLING COMMANDOS OF S.H.I.E.L.D. #6, Maria Hill ordered Kobik to turn Orrgo into a puppy. Loved and cared for in a way he’d never experienced before, the alien felt great rage when the veil dropped during the Avengers: Standoff! crossover. Still, after seeing his compatriots jump into action to not only save him but also try to make peace at Pleasant Hill, Orrgo realized that he did have a family, though a non-traditional one consisting of equally awesome monsters.

Television proves nearly fatal for Joe Hanson when he rewires it to allow the Creature from Krogarr into his living room in TALES TO ASTONISH #25.

In this article: Maria Hill, Kobik