When a thief stumbles on an alien spaceship, he becomes Earth’s last hope!

John Hunter had not earned any humanitarian awards before meeting up with an alien named Rommbu. The geologist-turned-thief had just been sentenced to life in prison for robbery and shooting a guard. And yet, even this apparent bad egg showed a bit of a good side in this Stan Lee and Jack Kirby collaboration from 1961’s TALES TO ASTONISH #19.

After his trial, John headed to his final barred home on a train. While using the restroom, the vehicle slowed down because of an unidentified flying object landing in its path. While the other travelers tried to make the emerging Rommbu feel comfortable, John made a break for the ship in an effort to avoid his cop entourage.

Though the Earthlings attempted to make nice with Rommbu, he revealed that, as a warrior from the Fourth Galaxy, he intended to conquer the planet. He then exhibited his high tech weaponry by shrinking and restoring a pair of men with a simple laser gun. 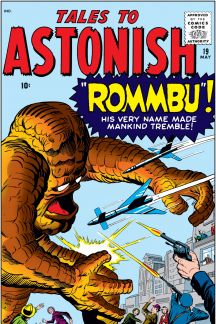 Rommbu then returned to his ship to await humanity’s response to his offer to let them surrender peacefully. While aboard, he soon discovered John’s presence and after hooking him up to the Mind Prober, figured this criminal wouldn’t cause him much trouble.

After using his ship’s Metal Disintegrating Rays on attacking fighter jets, Rommbu explained to John that if the planes had succeeded, his fellow Fourth Dimensioners would assume Earth too dangerous to keep invading. Not long after, the alien needed to recharge the ship’s electromagnetic batteries and asked the human for a safe place to do such a thing. John suggested a South Pacific Island called Watuna.

Upon landing, Rommbu questioned why John continuously checked his watch. Hunter stalled as long as he could until the time struck and volcanic Watuna erupted taking John, Rommbu and the creature’s ship with it!

Next time, return to see how a comic book artist with mysterious 3D paints created Zzutak, the Thing That Shouldn’t Exist!