A terrifying race from beyond the stars comes to conquer Earth!

Don’t you just hate when you plan something for a long time only to discover that you’ve forgotten one small, but important element? If so, then you should empathize with the Space Beasts—well, only if you ignore that whole thing where they tried to conquer Earth.

The race debuted in the pages of TALES TO ASTONISH #29 by Stan Lee and Jack Kirby when they invaded Earth, instantly exhibiting their ability to fend off fighter jets and disintegrate anything from statues to bridges. They soon conquered cities by destroying tank battalions and other heavy artillery. Eventually the conquerors made their way to more rural areas where they ran into a man named Jeb who stood up to the hulking brutes. 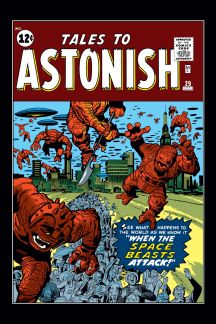 To the surprise of his family and others around them, Jeb succeeded in knocking out one of the aliens with the butt of his shotgun. In retaliation, another blasted the earthling with one of their disintegrator rays, but the shocks kept coming as the human stood his ground! He looked down to see that he remained unharmed, but the same could not be said for his metal buttons and belt buckle.

Quickly realizing that the ray guns only worked on metal, Jeb called out the information to everyone around him and they took out the contingent before spreading the word back to the major cities. With this crucial piece of information in mind, humanity found a way to fight back which soon led to a complete evacuation and retreat from the Space Beasts!