In real estate, it’s all about location, location, location. The same can be said for the professor who decided to work on his growth ray in Transylvania, former home of Dr. Frankenstein, according to the Stan Lee-Jack Kirby cover story from 1960’s TALES OF SUSPENSE #11. The scientist assumed that the huge old castle would offer plenty of space and privacy to work on his device. While he proved successful in the former, the latter didn’t quite materialize.

Given the townspeople’s penchant for gathering pitchforks and forming mobs, the doc shouldn’t have been too surprised when they burst in mid-experiment, attacked him, and dragged him away. Unfortunately, he didn’t have time to turn off the machine and the growth ray hit a nearby amoeba, inflating it to the size of the nearby buildings.

One villager attempted to blow the creature up with dynamite, but the being—named Sporr after an ancient legend—reconstituted itself and carried on. To save the people he never intended to harm in the first place, the professor took off into the nearby woods. His plan proved both successful and impressive as he led the monster to a patch of quicksand thanks to the assistance of a sugar-coated lab coat. Sporr got stuck in the muck and sank to its apparent death. 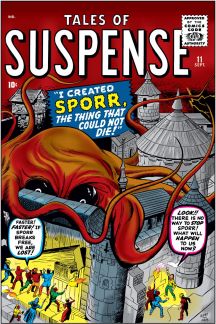 Back in town, the doctor promised never to tamper with nature while the townspeople more appropriately said they wouldn’t let their fears drive them. Perhaps only the latter party should have felt any guilt on the matter, but that’s an argument for another day.

Though the mutated amoeba version of Sporr seemed to stay in that sand, a number of other characters in the Marvel Universe have used the same moniker including an Inhuman and a huge, multi-tentacled Formalhauti that battled Thor and the Warriors Three in THOR #256 and #257.

Next time, see how a scientist’s intelligence formula for plants puts him in the weeds in TALES OF SUSPENSE #19.