Unleash the Beasts: The Blip

An alien looking to recharge its batteries meets the usual angry mob!

In 1961, Stan Lee and Jack Kirby kicked the year off by introducing readers to The Blip in TALES TO ASTONISH #15. The story began with an airport radar operator noticing an unexplained blip on his equipment. Unbeknownst to him, that signaled the arrival of an electricity-based creature who had just landed on Earth.

The next morning, people in the surrounding town woke up to find their electrical devices completely drained of power. Fueled by curiosity, the radar operator used an electrometer to scan the town in search of the source. It took him hours, but he finally found the creature in a cave. The being quickly explained that it simply needed time to rest and had no intention of causing any harm to the town or planet. Blip relayed that he had traveled to another planet to help out, but got caught in a space warp on his way home which sent him to Earth. He’s been drawing electrical power from the nearby areas to recharge and get back.

At the same time, the townspeople gathered up their guns and a dynamo to get their power back. They showed up at the caves just after Blip finished telling his new friend about his journey. Though he intended to simply explain himself again to this larger group, he frightened them and they started shooting. The angry mob wouldn’t even listen to the radar operator’s claims that the creature meant them no harm and labeled him a traitor. Realizing they couldn’t hurt the alien, the people turned their rage towards the man. This did not sit well with Blip who only then used his actual powers and strength to attack the humans. 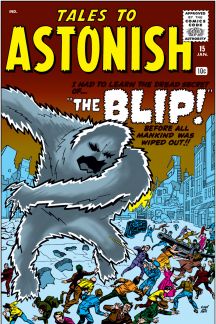 Disgusted by humanity, Blip used the energy from the dynamo to fully recharge himself and returned to the stars. As his new friend ascended, the radar operator tried defending his fellows. “Perhaps, next time our races meet, you frail mortals will have grown up—perhaps then you’ll be ready to join your brothers on other worlds, in other galaxies! Until then…farewell!” responded the alien.

Since that first appearance, “Blip” has come to stand for not just the alien who appeared in this issue, but a member of the whole race as well. Xemnu created a double to attack Hulk in the monster-filled INCREDIBLE HULK ANNUAL #5. Wolverine ran into some of this race in the pages of his first solo book while running around space in issues #136 and #137. Some pals of Logan’s encountered another Blip in UNCANNY X-MEN #33 when Kitty Pryde and Illyana Rasputin traveled to Monster Island to track down a powerful young girl named Bo, but only briefly. And, of course, most recently the electric alien has most recently been spotted in the pages of MONSTERS UNLEASHED #2 and #3 alongside all of the other classic creatures!