Unleash the Beasts: The Crawling Creature

A trip to the center of the Earth brings forth a terrifying new menace!

Just the other day, we mentioned that Metallo held the distinction of only showing up in his first appearance and then again decades later in MONSTERS UNLEASHED. Well, move over Metallo, because The Crawling Creature’s joining the club too! Introduced in TALES TO ASTONISH #22 from 1961, this Stan Lee-Jack Kirby creation made trouble for a high school student by the name of Walter Carter who fit in the Peter Parker mold in that this very intelligent young man failed to earn the respect of his classmates.

Instead of devoting his intelligence to physics or engineering, though, Walter focused his studies on folklore, specifically the stories revolving around huge creatures like trolls and giants that lived inside the Earth. So, when he saw an ad looking for someone “young and thin” to ride in an experimental drilling machine, he eagerly applied and got the gig!

Once down in the depths of the planet, Walter got out to look around armed with a flashlight and pistol. He soon came across a spear and unknowingly passed a caveman-like individual hiding in the shadows. The sentinel leapt from the darkness and knocked Walter out, only for him to come to in a primitive society underground that luckily also spoke English. 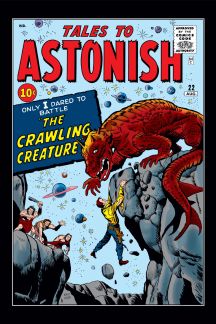 Walter’s new acquaintances showed him their livestock and farms, but also explained that their existence would be even better without the constant threat of The Crawling Creature. The young man instantly offered to help them out by blasting it with his gun. He soon made his way towards the Black Pool, the creature’s home, and came face to face with the enormous, orange lizard-like monster. That didn’t work out so well for Walter who ran back to the village where the natives dumped huge piles of salt, a substance that bothered The Crawling Creature.

A plan then formed in Walter’s mind and he returned to the tunneling machine, racing back to the surface. Just after he got rid of all the people who had been waiting to hear about his journey, The Crawling Creature burst into the bright light of day. Walter lead the beast down into the Grand Canyon. They both soon found themselves stuck in a cavern they couldn’t escape from. Feeling doomed, Walter was ecstatic to see a nearby helicopter that swooped down and picked him up. They both flew away, convinced the Crawling Creature would never escape from the hole.

The young man asked the pilot not to say anything about what he’d seen that day and returned to school feeling good about not only living his dream but keeping the underground dwellers’ existence from prying eyes or ears.

Next time, see how Xemnu went from “Hulk” to “Titan!”