Unleash the Beasts: The Genie

Criminal Freddy Sykes eventually learns the truth about being careful what you wish for!

Unlike many of the other Monsters Unleashed creatures, Genie doesn’t do anything terrible on his own accord. In 1960’s TALES TO ASTONISH #8, thanks to the artistic talents of Jack Kirby on pencils and Steve Ditko on inks, we meet the wish-granting being. Unfortunately for Genie—and the world—he found himself bound to a scheming ex-con named Freddy Sykes who read “Arabian Knights” while locked up in prison and eventually tracked down a stray lamp in a southern swamp after serving his time.

At first Freddy wished for opulent, but ultimately harmless items like a solid gold castle and a winged horse. After that, though, his requests became more harmful and megalomaniacal. He wished for the oceans to dry up and then to block the whole sun. Genie disapproved of each request, but had to fulfill them thanks to the rules binding his kind.

Just as Freddy intended to use the lack of water and sun to make himself the most powerful man on the planet, he had another idea: “If I traded places with the Genie—if I became the Genie, then I wouldn’t be dependent on him [anymore]! I would have all his magic powers and I could do whatever I wanted myself!” 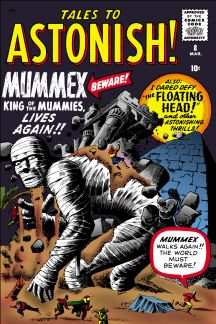 Well, apparently ol’ Freddy didn’t read all the same Genie stories we’ve seen because he completely forgot that they tend to be cursed into granting only the wishes of the one who freed them. With their roles reversed, Genie ordered Freddy to return the ocean and unmake the castle and horse before sending him back into his new home: the bottle. As Genie walked away, he pledged to live a life worth living while also hoping that Freddy would spend enough time cursed to learn his own lesson.

That didn’t quite pan out as Freddy the Genie appeared in the following issue of TALES TO ASTONISH. He’d floated around the swamp for a while, building up a layer of grime on his bottle, so when a passerby found it, he didn’t see anything inside but left it uncorked allowing Freddy to escape! The ne’er-do-well immediately flew to New York City and negated gravity before going on a country-wide tour of mayhem that also included bringing the moon to Earth. He then planned to take over the planet and extend his empire into space before realizing he lost his abilities outside of Earth’s atmosphere!

Quickly returned to the bottle, Freddy understood his punishment: “I know now that I’ll remain here until the greed and avarice are purged from my soul! And then—in time—who knows?” Who knows indeed?

Tomorrow, witness the birth of Devil Dinosaur and his pal Moon Boy thanks to the master monster maker Jack Kirby!