Unleash the Beasts: The Green Thing

A plant gains the gift of human intelligence and becomes a menace!

In 1961, Stan Lee and Jack Kirby tackled the mystery of plant intelligence in the pages of TALES OF SUSPENSE #19. Therein, a botanist theorized that, like humans and animals, plants must have a form of intelligence. To test the hypothesis, he developed a serum that could potentially raise the existing levels to those of a human.

The scientist traveled to a remote Australian island to test his theory on a “highly developed” plant called Ignatius Rex, but failing to find any he gave up and chose a nearby weed as the subject. The chosen plant started growing right in front of him, becoming taller than a man and speaking within moments.

With the botanist’s theory apparently proven he stood back and witnessed the newly evolved plant learn to walk. Even though he failed several times, he used his newfound will to make it happen. After using his arm-like appendages to pick up and launch a boulder, “The Green Thing” then laid out his new plans for the doctor: “You have given me intelligence and unlimited power! Now you shall serve me! You shall help me conquer the world!” 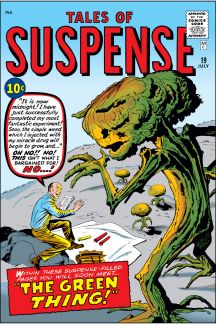 As the situation had gone from zero to 60 faster than anyone could have imagined, the scientist realized that plants, like people, have the capacity for good and evil. It was just his dumb luck to choose a test subject that fell in the latter category! The botanist refused to help and tried to strand his creation on the island with him. He grabbed the boat motor and smashed it underwater, but The Green Thing followed. In the murky depths the wily weed even fought a shark and won!

Back on shore, the chase continued until the scientist finally found a sample of Ignatius Rex, injected it and the two plant beasts fought with the newcomer standing victorious at the end. Ignatius Rex told the botanist to stop his experiments and leave him on the island without telling anyone else about it.

When he returned to the States, the scientist told everyone his experiment had failed, taking the hit so that no more evil plants might spring to life like The Green Thing did!

Next, Sgt. Mason discovers a group of giant insects living deep under the Earth in TALES OF SUSPENSE #24…or does he?!