Unleash the Beasts: The Insect Man

An experiment on loneliness accidentally uncovers a deadly underground race!

U.S. Army Sergeant Mason answered the call when the government wanted to test the emotional effects of one-man space travel in the pages of TALES OF SUSPENSE #24 by Stan Lee and Jack Kirby. To do so, a group of scientists built a replica of the space capsule and lowered it far below the Earth’s surface with Mason inside. The instructions remained fairly simple: “As soon as the strain of your solitary confinement becomes too much for you to bear, press the buzzer and we’ll hoist you up!”

Nine days later, Mason’s finger hovered over the buzzer when he heard something thumping outside the capsule. When he opened the hatch to see the cause, a monstrous giant insect showed its hideous face and captured him! Since the adults assumed this new find to be a mindless bug-thing they passed him off to one of the children as a pet. 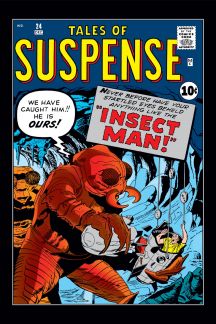 After being deposited in the kid’s playroom, Mason found himself hunted by a creature called Tabor. Wanting to keep his new pet safe, the kid zapped his “toy” with a force field ray and then literally tried to get him to jump through hoops. Soon enough, the adult returned, wanting to experiment on Mason using Tranquil-Gas. Our erstwhile hero pretended to be out of it and then made a break for his pod where he slammed on the buzzer and ascended to the surface.

Upon reporting his experiences to his superiors, they assumed the whole thing a hallucination brought on by his loneliness. Even Mason agreed that the explanation might fit. However, when a janitor swept out the capsule he brushed a huge insect hair into his dustpan and tossed it in the garbage without looking twice!