Unleash the Beasts: The Scarlet Beetle

Occasionally, a super hero faces off against a threat that seems perfectly tailored to their skill set. Hank Pym, otherwise known as Ant-Man, found himself in one of those situations in 1963’s TALES TO ASTONISH #39 in a story by Stan Lee, Larry Lieber, and Jack Kirby.

While doing his work one day, Pym noticed a strange signal coming from the ants, so he donned his Ant-Man gear and flew off to investigate. What he found shocked him: a menagerie of insects in the sewers being whipped into a frenzy by The Scarlet Beetle.

As the bug explained, he’d gained human-like intelligence and telepathy after atomic testing doused him in radiation. He planned to ally himself with the trillions of insects all over the world and use their numbers and abilities to take over the Earth.

Ant-Man, of course, set out to stop this, but found himself overcome by attackers who knocked off his helmet and tossed him down a sleek-sided hole. After putting the hero out of action, Scarlet Beetle exposed himself to Pym’s growth gas and grew to human size! 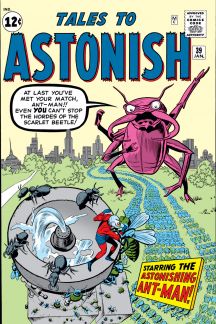 With Ant-Man trapped, the insects ran wild by chewing through telephone poles, stealing dynamite, poisoning judges, and breaking into television studios. Eventually, the ants—who remained the only un-controlled insects—found their master thanks to the still-transmitting helmet.

Once freed, Ant-Man entered the field of battle where he used a popsicle stick, a DDT rocket, the contents of a toy store, his shrinking gas, and a balloon to finally subdue the insectoid invader. Pym even cured the bug of the radiation effects and let him loose back in the wild.

However, no good idea goes un-resurrected as Scarlet Beetle popped up in everything from IRON MAN #44 and SENSATIONAL SHE-HULK #60 and even AVENGERS ORIGINS: ANT-MAN AND THE WASP.

Pym first appeared several issues earlier in the pages of TALES TO ASTONISH #27 as a scientist whose shrinking experiments put him on the level of ants. Lee must have seen some potential in the man and his abilities because he turned him into a super hero called Ant-Man in TALES TO ASTONISH #35. Pym, in his various identities stuck around the book eventually sharing it with Hulk before Sub-Mariner took the size-swapping hero’s spot with #69. Hank also helped found the Avengers and continues to play hero to this day, making him one of the most successful of the Silver Age scientists who populated these monster jamborees.