The Thing That Crawled by Night

A farmer attempts to feed the world and ends up creating a monster!

1962’s TALES OF SUSPENSE #26 kicked off with huge claims about it’s opening main character Jed Hanson. Stan Lee and Jack Kirby set the man up as the kind of person everyone should strive to be as he dedicated himself to finding a plant that could grow in the most inhospitable of climates in order to help feed those in other nations. Jed didn’t let anything silly like a stray meteorite landing in a nearby field deter him from breeding and cross-breeding until he developed a plant packed with “every vitamin in the alphabet and then some!”

What Jed didn’t know, though, was that his plant had been hijacked by a creature from outer space that could stretch its body around other trees as the first step in fully uprooting them! Just beginning, the creature continued to grow throughout the day, grabbing sheep and bulldozers with equal ease. Feeling guilty at his contribution to this menace, Jed did everything he could to stop the creature, but it just kept expanding no matter how much he and the others cut away. Hope seemed fully lost until the farmer literally stumbled over the original meteorite which he posited “must contain some element fatal to the plant.” 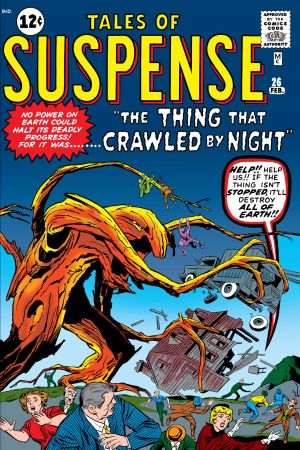 With a plan in mind, Jed drafted his wife and son to help him chop the space rock up with axes and distribute them around town. As the stone touched the plant-like creature, it immediately shriveled up and died. Glad to be done with the menace, the townspeople asked Jed to give up his dream of helping feed the world and he easily agreed: “I won’t monkey with anything I don’t know about!”

If he kept his word, it makes you wonder how The Thing That Crawls by Night appeared in the second and third issues of MONSTERS UNLEASHED!