Some villains come up with a plan and execute it right away while others take their time. Thorr definitely leaned more towards the latter as he waited a million years to destroy humanity!

As seen in a Jack Kirby-drawn story segment of TALES TO ASTONISH #16, an archaeologist named Linus and his less-than-nice wife Helen headed to a Pacific island populated with huge headed statues very similar to the ones seen on Easter Island. Their native guide explained that the statues preceded even their initial ancestors who populated the island many years ago. While digging around one of the oddities Linus discovered something even weirder: a high tech control room!

The thing called Thorr rose and revealed that he had come to Earth a million years prior as part of a plan to populate every planet in the cosmos with sleeper agents that could help the race invade and conquer when the time proved beneficial. Thanks to some quick thinking, Linus convinced Thorr not to contact his fellow invaders right away. The archaeologist explained that the island actually made up the bulk of the planet and that excessive force would not be needed. 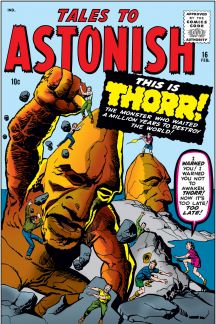 Thorr staked his claim and eventually summoned his brethren, but Linus continued to make secret plans that panned out surprisingly well. Once the craft landed, the scientist tossed a bundle of dynamite into the nearby volcano. Between the rush of lava and their inability to swim given their size, the giants stood zero chance against the attack!

As it turned out, even plots that simmer for a million years don’t always go as planned when the human element gets involved!

Want an extra bit of trivia? In addition to including a character called Thorr, TALES TO ASTONISH #16 also featured a story with Doom in the title, an attack by Mole Men and a crazy Steve Ditko-drawn tale about an evil sorcerer. It sure seems like those guys were on to some ideas that would take root and grow into something marvelous!

Next time, meet the menace of Gorgilla!