A misguided man casts a massive monster from simple wax!

Artists have always wondered what would happen if their creations sprang to life. In the pages of 1961’s TALES TO ASTONISH #17, Stan Lee and Jack Kirby turned that dream into a nightmare by introducing Vandoom, a man who created a massive monster to help bring in business for his failing wax museum.

The Transylvania-based artist got to work designing the creature and putting it together, but took great care in the process, noting, “I must do this slowly, cautiously. Each feature—each particle of wax—must suggest inhuman ferociousness!” Vandoom’s creation proved so large that he cut a hole in the roof of his museum to accommodate the wax statue. As the vicious visage took shape, the townspeople tried to get him to stop, but he kept on working.

Finally, with the piece ready to unveil the next day, Vandoom scrambled to the roof during an intense storm. Like something out of a storybook, the monster slowly came to life after lightning struck. Revealing its huge, gaping mouth, the orange beast smashed its way out of Vandoom’s museum to run amok. 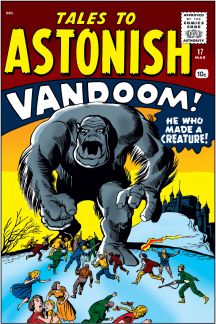 Vandoom tried reasoning with the villagers, positing that the new being might just be trying to get a feel for life and mean them know harm, but they didn’t appreciate his dose of level-headedness and got a torch-bearing mob together with characteristic quickness. The monster did his best to avoid the mob, but they came at him relentlessly. Just then, a spaceship full of Martians landed to conquer first Transylvania, then the world. Though they used telepathy, the signal proved so powerful that the surrounding humans could easily understand them.

As the monster came face to face with the aliens, Vandoom tried explaining to his creation that these new faces planned to hurt the planet. The creature plowed through the Martians, completely diverting the invasion in the process. After they fled back to their planet the monster collapsed, having exhausted its reserves. The villagers came to understand that they attacked the being without cause and that it had never even tried to harm them. They offered to help bury this version and assist the artist in creating another one which succeeded in bring in plenty of visitors to the museum.

Next, John Cummings enters the Dimension of Doom and confronts the Hypno-Creature in TALES OF SUSPENSE #23.