Weapon X Heads Towards Marvel Legacy and the Arrival of Nuke

Since its inception, the new WEAPON X title’s been cutting a bloody swath through a few of the darker corners of the Marvel Universe. Luckily, it boasts veteran comics scribe Greg Pak at its helm to guide it not only into the future, but to keep it grounded in the rich history of its characters and concepts.

We spoke to Greg about what’s to come in WEAPON X, as the book enters the Marvel Legacy era.

Marvel.com: Greg, as a Marvel writer, what does the word legacy mean to you personally? How much of it informs what you do on your books and most especially this one?

Greg Pak: From the time I first started writing for Marvel thirteen years ago, I’ve tried to approach each new project involving legacy characters with a mix of awe and fearlessness. Awe, because these are tremendous characters that have survived and thrived for decades and mean so much to their fans. And fearlessness, because in order to tell new stories that anyone gives a damn about, I have to dive into the thick of it, figure out what fresh take I bring to the table, take big risks, and try to tell a story that matters.

In practical terms, that means I’m always trying to get to the core of the character, trying to figure out the essence of what makes that character work. And at the same time, I’m trying to come up with new circumstances and angles and themes to take the character somewhere exciting. So legacy to me means respecting the origins, core, and history of the character—and striving to build on it to tell new stories that fans can dig their teeth into. 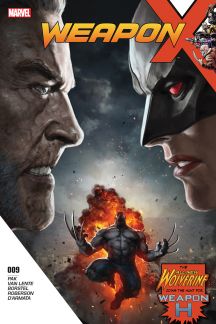 Marvel.com: Within the narrative itself, is there a sense of legacy at the Weapon X program? What weight does history carry there?

Greg Pak: The Weapon X program’s legacy is a history of horror, vivisection, zealotry, and sadism. It’s also an institution that’s changed hands a number of times as different villains have taken charge. So I don’t think within the actual Weapon X program there’s much of a sense of company pride, so to speak. Each new director is just using the tools and resources of the program to further his or her own ends.

What I’m saying is, these aren’t very good people!

On the other hand, among the victims and subjects of the Weapon X program, there can be a shared allegiance based on their similar experiences. At the end of our last arc, Logan’s team in the WEAPON X book defeated Stryker’s Weapon X program—and then took the Weapon X name for themselves. So that’s a kind of new legacy they’re claiming.

Marvel.com: Likewise with our heroes: how do Logan and Sabretooth view the concept of legacy? And then Warpath and Domino—what about them?

Greg Pak: Logan and Sabretooth are two of the oldest mutants running around out there, and probably the oldest memory they share is their mutual hatred of each other. So maybe you could say that their sense of legacy on this team is tied up with this eternal conflict they share—which maybe means they both know they’re destined to tear each other apart some day again. But I don’t know if they really think in terms of “legacy” at all. They’ve both seen hundreds of friends and enemies die; they’re each nearly immortal and nearly unkillable. They’re haunted by their pasts, but I think that for their own sanity, they mostly live moment-to-moment, with Logan just trying to do the right thing through whatever means necessary at any given moment and Sabretooth just doing whatever feels good at any given moment.

Similarly, I don’t know if legacy means a ton to Domino, either. She’s got her own weird and tragic past, but she’s made a life for herself as a happy-go-lucky merc. She’s generally going to stick up for the underdog when push comes to shove, but she doesn’t have a grand plan of legacy building or anything like that. That’s one of the things that makes her interesting in the team, of course—she’s unpredictable, like most of the team’s members, which is key to the ongoing tension and drama in the group.

Warpath is a bit different, though. I think he’s very conscious of family and history—his most traumatic life experience was the murder of most of his family in Camp Verde. I think he feels a huge amount of responsibility to his family and tribe and to his extended family of mutants. At some point that bigger sense of responsibility and legacy will probably put him into conflict with other members of the team.

Marvel.com: Now, as a non-mutant, what holds Lady Deathstrike together with our leads? What’s her prime motivation in the book?

Greg Pak: Lady Deathstrike suffered similar mutilations and experimentation as Logan and Sabretooth and she was an early victim of Stryker’s new Weapon X, so when it came time to take him on, she was happy to team up with everyone else. She’s continued to stick with the team as they’ve taken on new challenges, but it’s an open question how long she’ll stay with the team or exactly what her true motivations are. Let’s not forget, it wasn’t too long ago that she was a straight-up villain and one of Wolverine’s and Domino’s worst enemies.

Marvel.com: Indeed. So, beyond all that, what getting you most jazzed about this book as you move forward?

Greg Pak: In our next storyline, we’re diving into the incredible mythology of Nuke, the patriotic superhero first introduced by Miller and Mazzucchelli in DAREDEVIL: BORN AGAIN. DAREDEVIL: BORN AGAIN was one of three or four books that pulled me back into comics when I was in college. It’s just phenomenally good storytelling and Nuke is such a tremendous character, so this new arc is a dream-come-true. The icing on the cake is that the great Yildiray Cinar is drawing, and he’s just a total pleasure to work with. Can’t wait ’til we can show it to you!

Marvel.com: Any hints at something specifically cool coming up? Some more big surprises?

Greg Pak: A big turning point in all of our characters’ relationships within the team is coming, and with big, big repercussions. Keep on reading!

In this article: Marvel Legacy