What Carol Danvers Did During 'Civil War'

Look back at Carol Danvers' career in Marvel Comics with our latest History of Captain Marvel!

Even after her stint with the Avengers as Warbird, Carol Danvers kept the name for a time as she continued working for Homeland Security. In 2006, she quit that gig and decided to focus on her hero career which nicely coincided with her new MS. MARVEL series, launched by Brian Reed and Roberto De La Torre.

At the beginning of the book, Carol told her friend Jessica Drew that she wanted to focus on being one of (if not the) best heroes around. In the first arc of the series, she made some headway in that arena as she met with the head of a big time PR firm, took out a Brood pod that landed in Spaulding, Georgia, fought an alien Brood exterminator called Cru, and teamed up with Doctor Strange to tangle with a time traveler by the name of Sir Warren Traveler.

But all of that acted as a prelude to CIVIL WAR!

After a devastating incident in Stamford, Connecticut, Iron Man, Reed Richards, and others supported the Super Hero Registration Act which would legally require heroes to reveal their identities and powers to the government and also report for training. Anyone who refused–like Captain America and his allies–would be arrested.

As the MS. MARVEL title entered CIVIL WAR, Captain America showed up at Carol's hotel room to talk to gauge her interest in joining his side. As a former military member and a law-abiding citizen, Carol saw Registering as the only option, which disappointed Cap. She began working with S.H.I.E.L.D. and other registered heroes to track down fugitives from law like Prowler, the Shroud, Arana, and even Spider-Woman Julia Carpenter.

Ms. Marvel fought alongside Iron Man and his group through some of the most heartbreaking moments of the conflict, like the death of Goliath at Ragnarok's hands and the final battle in which Captain America surrendered. 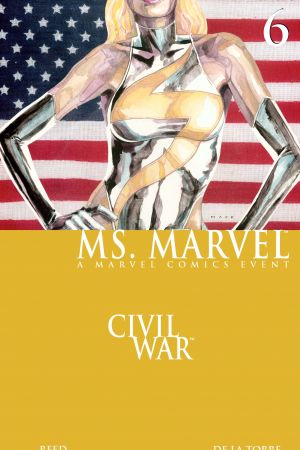 After dealing with some old feelings of anger and inadequacy with Rogue and an alternate reality version of herself, Danvers threw herself into working with the Initiative, the official Super Hero training and policing body in the post Registration Act world. She continued working with the young hero Arana, fought Doomsday Man again, helped Julia Carpenter find her daughter, and even fought M.O.D.O.K. and the Scientist Supreme of A.I.M.!

At the same time, Ms. Marvel easily made Iron Man's roster for the MIGHTY AVENGERS team alongside her flame Wonder Man, Black Widow, Sentry, Wasp, and Ares. The team kicked into high gear right away taking on Mole Man's monsters and then a new version of Ultron who took on Janet Van Dyne's form! The team then focused on stopping a symbiote virus attack, taking the fight to its originator, Doctor Doom!

Back in her own title, Ms. Marvel started working with an Initiative strike force consisting of Machine Man and Sleepwalker. She and her team traveled to Puerto Maravilla where the Puppet Master had managed to mentally enslave scores including heroes Silverclaw, Stature, Tigra, and Arana until her team stopped him. She even let Puppet Master blow himself up, but told everyone she failed to stop him. 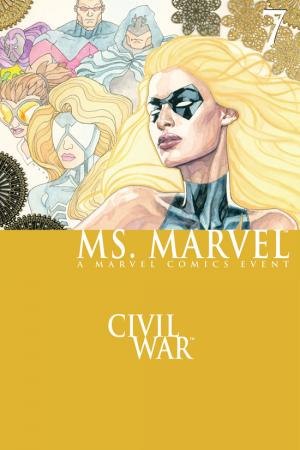 Throughout all of these experiences, Carol had been secretly dealing with problems stemming from her first meeting with Cru. She'd morphed into a blue, monstrous individual and had heard voices. When Cru reappeared, the alien attempted to link up with Carol, but she broke contact just in time to find them about to be trampled on Monster Island!

Cru explained that they'd become intertwined during their first encounter and need some time to separate them properly. The process became interrupted when Brood attacked and made off with Cru's body while her consciousness remained in Carol's head. They both soon found themselves defeated before the Brood Queen that Carol thought she killed during her first mission as Binary.

Luckily for Ms. Marvel–and the rest of the planet–Sleepwalker, Machine Man, Machine Man, and Arana showed up to stop the Brood from taking over Earth. That gave Danvers time to rejoin with Cru and come back with Binary powers! They stuck around long enough for her to kill all of the Brood except the queen, but gave out during their final battle. Through Cru attempted–and failed–to stop the Queen, Carol figured out a way by taking her to space, throwing a self destruct bomb in her throat and blasting her out of the galaxy. 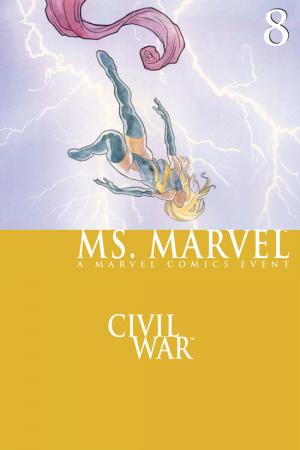 All of that led directly into another INVASION, this one of the Skrull variety, but we'll get to that next time!