What Happened After 'Infinity Gauntlet'?

The INFINITY WARS are over! But a new Infinity Stones saga is just beginning...

This week, writer Gerry Duggan and artist Andy MacDonald’s WOLVERINE: THE INFINITY WATCH #1 offered fans the first glimpse of the Stones’ new status quo. At the end of INFINITY WARS, Adam Warlock granted the Stones souls of their own, in order to prevent their future misuse. Now, Wolverine and Loki have discovered that the Stones may actually be people. And there are already cosmic forces lined up to claim their infinite power for themselves.

While the final makeup of the new Infinity Watch is still yet to be revealed, similar events unfolded in the aftermath of INFINITY GAUNTLET. The Living Tribunal made it impossible for the Infinity Gems to be used together as one. Therefore, Adam Warlock took it upon himself to form the first Infinity Watch.

In a way, WARLOCK: THE INFINITY WATCH was a precursor to the modern Guardians of the Galaxy team. Almost all of the Infinity Watch went on to have prominent roles among the Guardians, while the final member became their greatest enemy...

To celebrate WOLVERINE: THE INFINITY WATCH’s new team, Marvel.com is taking a look back at the original six members of the first Infinity Watch.

Although Adam Warlock emerged with the INFINITY GAUNTLET, even he came to realize the folly of being a god.

It was Warlock’s decision to recruit his friends and allies as the Infinity Watch, before setting up their new home on Monster Island. Warlock held on to the Soul Gem, because he had formed a bond with it before and after his first death. Although the Infinity Watch wasn't a conventional team, they proved to be invaluable heroes during INFINITY WAR and INFINITY CRUSADE.

Warlock held the team together until the Soul Gems were briefly lost to an alternate universe.

“The Deadliest Woman in the Galaxy” was also newly returned to the realm of the living after INFINITY GAUNTLET.

At the time, Gamora was deeply in love with Warlock, and she was also his most trusted friend and ally. He gave her the Time Gem for safe keeping. Gamora’s time on the team put a severe strain on her relationship with Warlock, but it also paved the way for her stint with the Guardians of the Galaxy. Essentially, everything Gamora knew about being a hero came from her work with the Infinity Watch.

Pip was also one of Warlock’s closest friends and a natural choice for the Infinity Watch.

He was given the Space Gem, which he held between two of his toes. As unsavory as that may sound, it allowed Pip to put the Space Gem to good use. The Gem gave Pip the ability to teleport almost anywhere in the Universe at will. Naturally, Pip couldn’t resist getting into mischief, but he was largely loyal to the team throughout its first incarnation. 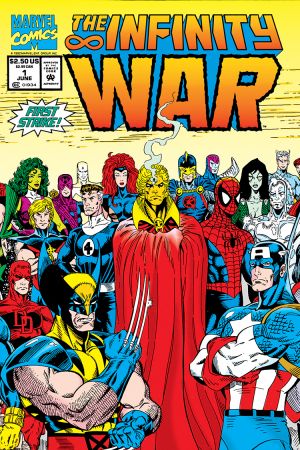 Drax’s third life was complicated. On Earth, Arthur Douglas was a jazz musician who had the misfortune of being murdered alongside his family by none other than Thanos himself. He was resurrected as Drax the Destroyer and given a new purpose by seeking revenge on Thanos. But in the end, Drax was killed by his own daughter, Moondragon, as she telepathically ravaged his mind.

The damage to Drax’s mind remained when he was resurrected for a second time. Drax simply wasn’t the man he used to be, and his intellect was severely impaired. To illustrate his state of mind, Drax protected the Power Gem by swallowing it. And it did make Drax more powerful than ever before, even if he couldn’t always properly apply that power.

As a child, Heather Douglas was the sole survivor of the attack that claimed her family. She was then raised on Titan, and trained to become a telepath. As Moondragon, Heather was a hero and even an Avenger for a time. But her power, and the influence of the malevolent Dragon of the Moon, eventually drove her mad. She killed her own father, years before her own life was claimed.

After Moondragon’s resurrection, she was reunited with Drax in the Infinity Watch. While she valued the Mind Gem, Moondragon was wary around Drax and she openly wondered how much he remembered about what she had done to him. When Moondragon was rendered comatose, Drax refused to leave her side. That helped heal the divide between father and daughter, and they were later reunited again later as members of the Guardians of the Galaxy. 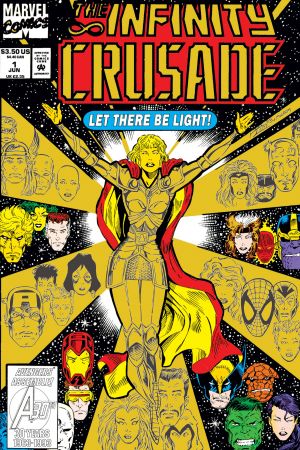 It’s largely been forgotten, but Thanos was the unofficial sixth member of the Infinity Watch. However, Thanos was truly changed by the events of INFINITY GAUNTLET. For a time, he had no interest in resuming his life as a conqueror and he only wanted a more peaceful existence. Warlock recognized that change in his old enemy, and trusted him with the Reality Gem.

But even at his best, Thanos was a schemer who always had his own agenda. While Thanos helped Warlock defeat the Magus and the Goddess, their alliance was never destined to last. This may have been the only time Thanos has ever been on a superhero team, even in a limited capacity. Years later, Thanos re-embraced his darker ambitions and once again became one of the deadliest villains in the Marvel Universe.