When Dracula Entered the Marvel Universe

Celebrate Marvel's 80th anniversary by taking a bite out of the Lord of the Vampires' long history!

Throughout 2019, we're celebrating Marvel's 80th anniversary by using the powers of Marvel Unlimited to examine a major character's evolution throughout the history of the House of Ideas.

The vampire known as Dracula has been haunting imaginations since he debuted way back in Bram Stoker's eponymous 1897 Gothic horror classic. From the page, he moved on to the big screen—but in 1972 he began preying upon the denizens of the Marvel Universe with the debut of TOMB OF DRACULA!

Chronicled by Gerry Conway and Gene Colan with Marv Wolfman taking over before long, this series not only brought Vlad Tepes Dracula into the '70s, but built an entire world around him—one that also happened to be populated by Super Heroes, other monsters, and even gods!

In the first issue, Dracula had been entombed in his castle with a stake driven through his heart until his descendant Frank Drake showed up with his girlfriend Jeanie and their duplicitous pal Clifton. Clifton managed to resurrect Vlad's bloodlust by removing the stake and unleashing the famous fiend on an unsuspecting world.

The Lord of the Vampires doesn't need his own book to cause trouble, though. On more than a few occasions, he's shown up to give the X-Men trouble (especially Storm UNCANNY X-MEN #159 and UNCANNY X-MEN ANNUAL #6). In the 2006 series X-MEN: APOCALYPSE/DRACULA, readers learned that the vampire had yet another connection to mutants in a shared enmity for En Sabah Nur going back to Victorian London.

Dracula and every other vampire on the planet were taken off the map for a time thanks to the Montesi Formula, but returned in the '90s with some help from Hydra's misguided efforts to clone him!

In CAPTAIN BRITAIN AND MI13 #9-#15, Dracula made one of his biggest plays against humanity when he decided to take over the United Kingdom, first by firing vampires at members of Captain Britain's team from his base on the moon! Though he came very close to succeeding in his mission, he ultimately fell to a woman named Faiza Hussain who then wielded Excalibur.

Never one to stay dead for long, the vampire king reappeared in DEATH OF DRACULA through unknown means and with a very different look, now sporting red armor and long white hair. The story lived up to its name when his son Xarus staked dead old dad in the middle of a vampire conclave. This lead into the CURSE OF THE MUTANTS story that kicked off the 2010 X-MEN series, wherein the upstart vampire intended to put his people at the top of the Earthly hierarchy. 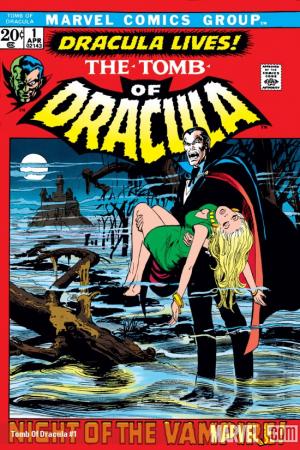 To put a stop to this, Cyclops had his people resurrect Dracula. He then took control of the Vampire Nation and called off the war, killing Xarus in the process and living up to an agreement with Cyclops that would keep him from following his son's domination game plan.

Dracula did decide to keep the Vampire Nation together and even set up a base in the Carpathian Mountains in the area once known as Transylvania where they remained in secret until the Hulk got punched there by Thor leading into FEAR ITSELF: HULK VS. DRACULA. Changed into Nul: Breaker of Worlds, the Jade Giant took on Drac's vampire super squad known as the Forgiven.

In DEADPOOL: THE GAUNTLET, Dracula hired the Merc with a Mouth to track down a coffin containing a woman named Shiklah so he could marry her and unite various monsters under one kingdom. 'Pool wound up with her and helped her take over Monster Metropolis before she left him and got hitched to the king of the vampires anyway as seen in the 'TIL DEATH DO US PART crossover!

Most recently, in AVENGERS #10, Janet Van Dyne saved Blade from Dracula's castle, and in issue #12 she fought off his forces to bring Morbius in. Thanks to some help from Odin, Black Panther found out that a force called the Shadow Colonel and his Legion of the Unliving had been amassing forces against Vlad leading to a vampire civil war.

With Castle Dracula literally burning to the ground in this week's AVENGERS #14 and bloodsuckers of all kinds running wild, everyone—including the Avengers and the Shadow Colonel—have one question on their lips: "Where is Dracula?" As the new player played part of his hand in Avengers HQ, Dracula himself appeared asking for political asylum in Russia!

It doesn't take a mythologist to see that Dracula might have something up his sleeve, but we'll all just have to wait and see what it is until the next issue of AVENGERS!