A look back at Peter Parker’s struggles with the infinite power of Captain Universe!

Last week, Otto Octavius got his first taste of the Power Cosmic in SUPERIOR SPIDER-MAN #3. When Otto was Doctor Octopus, that power would have been the realization of his darkest dreams, but now that Otto is once again trying to be a hero, he used those increased abilities to face Terrax, the former Herald of Galactus.

Otto’s brush with ultimate power came almost 30 years after Peter Parker had a cosmic episode of his own. In 1989, Loki manipulated Doctor Doom, the Kingpin, Wizard, Magneto, Red Skull, and the Mandarin to join forces in ACTS OF VENGEANCE! Loki’s key theory was that the heroes had become too accustomed to their regular enemies, and the villains needed to trade opponents to finally finish off their adversaries. It’s not a bad idea, but one of the biggest hitches in the plan was none other than Spider-Man. No matter who they threw at him, Spidey always came out on top.

However, it wasn’t as easy as it sounds. In PETER PARKER, SPECTACULAR SPIDER-MAN #158, Peter almost fell in battle to the Trapster, a Z-list villain who used to call himself Paste-Pot Pete. In that same issue, Peter was present when an experiment run by Professor Max Lubisch unleashed the Enigma Force. That was the beginning of Spidey’s exponentially increasing super powers.

Those powers changed the game for Loki’s cabal. Doom wanted to steal Spidey’s new abilities for himself, while Magneto thought Peter would be a potential recruit for mutants in his war on mankind. Meanwhile, Spidey took out the Brothers Grimm, Goliath, Titana, Rhyno, Shocker, Hydro-Man, and more while barely breaking a sweat. 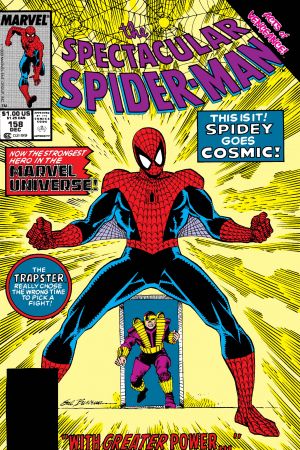 But just because Spider-Man was more powerful than ever, it didn’t make Peter’s life any easier. In fact, it made New Yorkers even more afraid once they saw that Spidey was truly without limits. It probably didn’t help when Spider-Man declared himself to be a menace in SPECTACULAR SPIDER-MAN #160, and the public couldn’t really disagree. Even Mary Jane was on edge around Peter, which put a strain on the early days of their marriage.

Casual Spider-Man fans may not realize it, but the ACTS OF VENGEANCE! Cosmic Spidey tie-in issues had a line up to die for. Gerry Conway wrote the SPECTACULAR SPIDER-MAN and WEB OF SPIDER-MAN issues, for artists Sal Buscema and Alex Saviuk, respectively. Meanwhile in AMAZING SPIDER-MAN, David Michelinie was joined by three industry legends: Colleen Doran, Erik Larsen, and Todd McFarlane.

AMAZING SPIDER-MAN #328 was McFarlane’s last issue as the regular artist, and he went out with a bang. This is the famous issue where Spidey took on the Grey Hulk and literally punched him into orbit. McFarlane also had fun with Spider-Man’s new powers by giving him a few poses better suited for the Distinguished Competition’s primary hero. It’s easily one of the best issues in the entire storyline, and an amusing way for McFarlane to transition to his own SPIDER-MAN series. 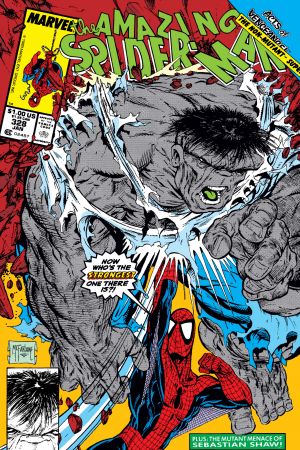 The entire story came to a head in AMAZING SPIDER-MAN #329, when the Tri-Sentinel was born from Loki’s magic and Sebastian Shaw’s technology. By that time, Loki’s scheme had been thwarted, and he wanted to leave behind one last nasty surprise for the heroes. An attempt to steal Spidey’s powers backfired and made him realize that Lubisch’s experiment had tapped into the Enigma Force. Years earlier, the Enigma Force was revealed to be the sentient power that choose men and women to be Captain Universe for a short time. Peter was chosen because the Enigma Force foresaw the threat of the Tri-Sentinel. However, Lubisch’s research had accidentally given Peter the power without the awareness.

For anyone who had been following the story, this wasn’t a huge shock. WEB OF SPIDER-MAN #60 even featured Captain Universe’s costume superimposed over Peter’s outfit. But it did lead to some closure for the event, as Spidey used the last of his powers to put an end to Loki’s scheme.

The repercussions from that story played out in SPIDER-VERSE and its sequel, SPIDER-GEDDON. One of the alternate universe Spider-Men was a Peter Parker who never gave up the Captain Universe powers. While that Spidey fell in battle to the Inheritors, Miles Morales was chosen by the Enigma Force at the end of SPIDER-GEDDON. Miles’ time as Captain Universe was brief, but we suspect that neither Spider-Man has seen the last of the Enigma Force. Because with ultimate power comes ultimate responsibility. There’s nobody we trust more with that burden than Peter and Miles.