Do you know who Yondu Udonta is? The answer may depend upon your first introduction to the Guardians of the Galaxy. The original Yondu made his debut alongside the original Guardians in MARVEL SUPER-HEROES (1967) #18 in the far future of the Marvel Universe. In that incarnation, Yondu was a noble warrior of the Centaurian people who had a deeply spiritual side.

The modern Yondu Udonta, however, is very different from his retro-future counterpart. This version of the character first appeared in STAR-LORD #1 (2015) as a pirate and a leader of the Ravagers. He also had a more ruthless and cynical approach to life compared to the Yondu from the future. Modern Yondu’s head fin was also noticeably shorter. And until recently, the two Yondus never crossed paths. But that changed in 2019 with a limited series by Lonnie Nadler, Zac Thompson, and John McCrea... YONDU!

Now that the entire YONDU series is on Marvel Unlimited, readers can enjoy the contrast between the Yondus and explore their hidden secrets with a tale steeped in Marvel lore. But first, Marvel.com is giving you a primer on everything you need to know about Yondu!

Star-Lord only has a cameo appearance in YONDU; the focus of the series clearly falls upon Udonta himself, who is no longer a leader among the Ravagers. Instead, Yondu is on his own in issue #1, and seemingly alienated from nearly everyone else in his life. This issue also reestablishes the classic Guardians of the Galaxy lore that Centaurians worship a deity called Anthos, who communicates to them through flames. But Yondu is a non-believer, despite happening upon the score of a lifetime when he finds the Herald’s Urn. 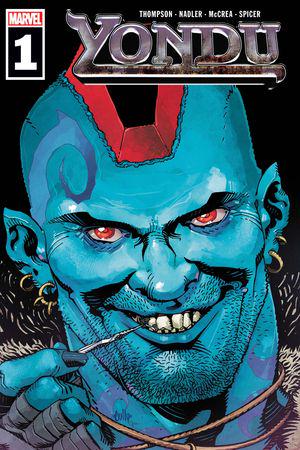 Back From the Future

The future Yondu from Guardians of the Galaxy is a firm believer in Anthos. And in ish #1, Anthos allows future Yondu to understand that he has to go back to the past and prevent his counterpart from misusing the Herald’s Urn. Issue #4 confirms that this future Yondu is the same one who fought alongside the OG Guardians for years, before reconnecting with his lost tribe in GUARDIANS OF THE GALAXY (1990).

Future Yondu gave up his life with his wife in order to put present Yondu back on the right path. Although it’s unclear if the present character is a direct ancestor of future Yondu, the future Yondu’s name was directly taken from a legendary hero in Centaurian culture. However, it’s difficult to believe that the present Yondu could possibly be the Yondu of legend... 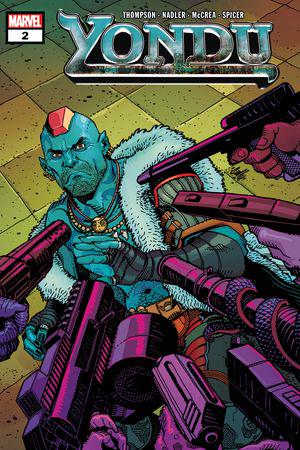 Why is the Herald’s Urn so important? Issue #2 held the answers for that question. The short version is that the Herald’s Urn allows the user to draw upon the Power Cosmic. It was made from the body of the Fallen One, Galactus’ original herald who first appeared in THANOS (2003) #11. The Fallen One tried to destroy Galactus on multiple occasions before he was defeated.

Thanos eventually enslaved the Fallen One as his own herald until he was slain by cosmic gods in ANNIHILATION: SILVER SURFER (2006) #4. YONDU #2 revealed that Thanos took the Fallen One’s body to Nidavellir, the realm of the dwarves, and forced them to turn it into a weapon that became the Herald’s Urn. However, Thanos’ own demise in ANNIHILATION meant that he never arrived to pick up his deadly order. For years, the Herald’s Urn was safely hidden until it emerged at the beginning of this story. 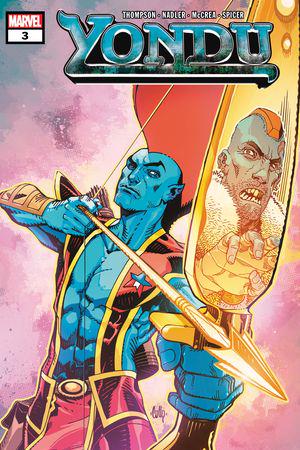 As future Yondu tried to convince his counterpart to trust him, both Yondus were hunted by Sav'rkk, a rare hybrid of the Shi'ar and the Skrull. Sav'rkk’s relentless pursuit cost the life of someone present Yondu cared about, and he briefly stranded both Yondus on Galador, the lost homeworld of the SpaceKnights.

The SpaceKnights and their people were believed to have been destroyed in the war with the Builders in INFINITY. In reality, the Galadorians barely survived and struggled to get by on their devastated planet. Future Yondu was so moved by their plight that he vowed to return one day. In the meantime, future Yondu decided that Anthos had sent him to the past not only to protect the Herald’s Urn, but also to save his younger counterpart. 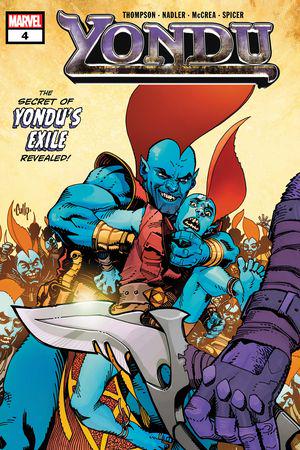 YONDU #4 revealed how present Yondu became an outcast among his people. It began shortly after an alien race called the Syneca made first contact with the Centaruians and formed a mutually beneficial alliance with them. That alliance didn’t last long after Youndu and his friend took a Syneca ship on a joyride that destroyed the Elder temple and led to the death of Elder Chondu.

As punishment, present Yondu’s fin was forcibly cut from his head and he was exiled from his people on pain of death. With no other options, he snuck aboard the Syneca ship and eventually became a space pirate.

Because present Yondu was excommunicated from his tribe, he never properly learned how to control the Yaka arrows by whistling. But that was a skill that future Yondu mastered long before his journey to the present. Although the two Yondus didn’t see eye-to-eye, they did forge a bond with each other. And for the first time in years, present Youndu allowed himself to feel a connection with Anthos and he finally controlled a Yaka arrow with his own whistle. 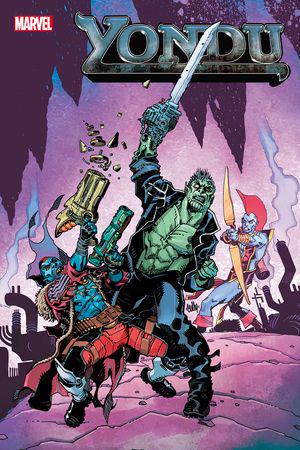 YONDU #5 wrapped up the story with some hard choices for the two Yondus—with the fate of the timeline in their hands. Present Yondu was also greatly changed by the experience. Perhaps he really will grow into being the Yondu Udonta of legend... But for now, he’s still a lovable scoundrel at heart.

Read all of YONDU on Marvel Unlimited today!

Earn Points, Get RewardsJoin NOW!
In this article: Yondu, Guardians of the Galaxy, Marvel Unlimited