Where Do the X-Men Stand After 'X of Swords'?

Download the new status quo on the island of Krakoa!

The swords have been sheathed, and the battle is over. But the repercussions of X OF SWORDS will continue to be felt for a long time to come.

Against overwhelming odds, the X-Men and the nation of Krakoa have emerged triumphant in the tournament against the swordbearers of Arakko. However, not all of the heroes are unscathed, and the DAWN OF X is over. Now, before the REIGN OF X begins...

...it’s time to breakdown some of the major developments that unfolded in X OF SWORDS.

The X-Men thought that they had conquered death with the Resurrection Protocols. Yet death found a way back into the equation in X OF SWORDS: CREATION #1. Because Summoner murdered Rockslide in Otherworld, it corrupted his backup in Cerebro and ensured that he could not be reborn as he was. Santo Vaccarro was gone forever, and the Rockslide resurrected in his place is an entirely different person. 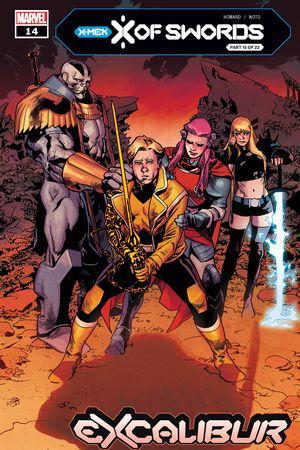 That’s what made the tournament so deadly. The X-Men knew there was a very strong chance that not all of them would survive. That prediction turned out to be true.

In WOLVERINE #6 and X-FORCE #13, Wolverine literally went to Hell and back to get a new Muramasa blade for the tournament. His opposite number, Solem, was also on a quest for a Muramasa sword. Solem seemed to take a liking to Wolverine as they were imprisoned in Hell, and he implied that they would be either the best of friends or the deadliest of enemies.

Solem enjoyed fighting alongside Wolverine so much that he didn’t abandon him to the fires of Hell. Instead, he sold Wolverine one of the two Muramasa blades in exchange for a fight. He called in the marker on Logan in WOLVERINE #7 by forcing him to battle War in his place. Even though the debt has been paid, Solem was conspicuously absent from the final battle... And there was also a prediction that the twin Muramasa swords will not be kept apart for long.

Uncharacteristically, Sinister offered to send his team of misfits into Arakko on a secret mission to sabotage the tournament and force the other side to forfeit. But because everyone else on the Quiet Council hates him, Sinister was forced to accompany his team. It’s unclear which Sinister clone led the mission in HELLIONS #5-6, but it was a catastrophic failure for his reluctant charges. 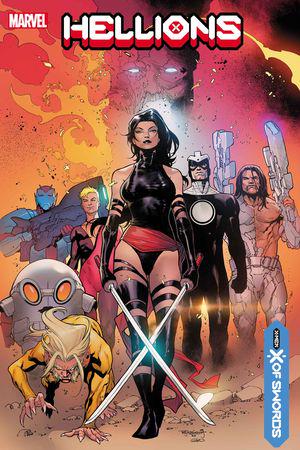 Not only were the Hellions too late to stop the tournament, they were also confronted by the deadly team of mutants known as the Locus Vile. Wild Child, Nanny, Orphan-Maker, and even Sinister himself were seemingly left behind to die, while Havok, Psylocke, Greycrow, and Empath narrowly escaped with their lives. It turns out that Sinister never cared about the tournament at all; he simply wanted DNA samples of Arakko’s mutants.

After blackmailing Psylocke to return to Krakoa with the stolen DNA, another Sinister clone murdered his remaining Hellions and hid all evidence of his crime.

At an unorthodox dinner party in MARAUDERS #14-15, the heroes of Krakoa were forced to socially mingle with Arakko’s swordbearers. Death took an immediate liking towards Storm, and she accepted his invitation to dance. She also told Death in no uncertain terms that she was familiar with what he represented, but unafraid of him. 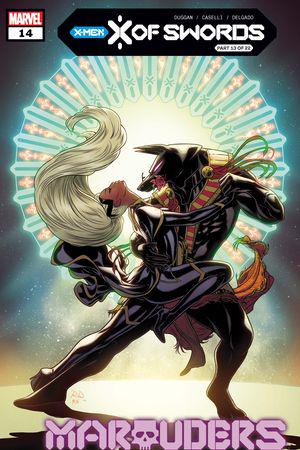 Storm backed those words up in X-FORCE #14, when she faced Death in battle. Even bereft of her powers, Storm emerged the victor and seemingly slew Death.

The First to Fall

But not every battle went as smoothly. The new Captain Britain, Betsy Braddock, wielded the magnificent Starlight Sword against Isca the Unbeaten and her sword, Mercy. Isca easily defeated Betsy as she literally went to pieces. And Saturnyne, the cruel Omniversal Majestrix, clearly meant for that to happen.

When the final battle began, Saturnyne assembled the broken pieces of Betsy into a new mosaic on her bedroom floor. This successfully created a new Captain Britain Corps to defend the Starlight Citadel. But much to Saturnyne’s horror, the new Corps are all made up of different incarnations of Betsy. However, the prime Betsy remains missing in action.

It turns out that Doug Ramsey really is a lover, not a fighter. Shortly after Betsy’s apparent demise in EXCALIBUR #14, Doug was summoned to a wedding... His own wedding! Bei the Blood Moon was Arakko’s champion for the Trial By Wedding. Intriguingly, Bei’s mutant power, the Doom Note, is the only way that she can vocally communicate. The Doom Note also negates Doug’s power to master languages, which means that he is the only one who can’t understand her.

Yet Doug was intrigued and clearly attracted to Bei, and the feeling must have been mutual. Doug managed to keep Bei from killing any of his friends, and she ultimately chose love over her own people. That’s why she fought alongside the X-Men, and why she’s likely moving to Krakoa as well.

Following Wolverine’s attempt to kill her at the dinner party, Saturnyne seemed to enjoy giving the swordbearers of Arakko an overwhelming advantage. Almost all of the ensuing duels were geared to give Arakko points in the tournament. Even when the X-Men won, the twisted rules often gave the actual victory to their opponents.

“This Is How a Mutant Dies”

In the penultimate battle of the tournament, Gorgon faced the White Sword and his 100 soldiers. Gorgon has always been an odd choice to serve as one of Krakoa’s champions. He was once one of Wolverine’s deadliest foes, and personally responsible for Logan’s brief tenure as an assassin for the Hand. Yet Gorgon was also steadfastly loyal to the vision of Krakoa and its ideals.

CABLE #6 depicted Gorgon’s final battle as he evened the score by slaying 13 of the White Sword’s best fighters. Gorgon also refused to allow the White Sword to resurrect him as his slave before he was cut down at last. Whatever else he was, Gorgon died a hero of Krakoa. 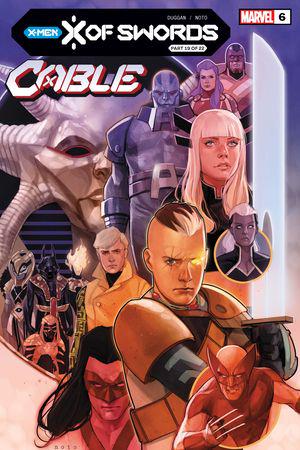 The Breaking of the Quiet Council

After a psychic SOS from Cable, Cyclops and Jean Grey planned a rescue mission to Otherworld to reclaim their surviving teammates before it was too late. Sensing an opportunity to seize power, Sebastian Shaw suggested that anyone who left with the Summers family would be kicked off the Quiet Council. And the motion passed with support from both Magneto and Professor Xavier.

Kate Pyrde and Nightcrawler nearly quit the Council anyway, but they were ultimately dissuaded from going through with it. Only Jean lost her seat, and one other council member remained behind in Otherworld. This means that there’s a power vacuum on the Quiet Council as well as the first real conflict at the table. Additionally, the Quiet Council seems intent upon phasing out the X-Men entirely, considering the Super Hero team to be an outdated concept.

One of the biggest secrets of the event was that Apocalypse’s long-lost wife, Genesis, was merged with the helm of Annihilation. Thus Apocalypse’s greatest enemy was also the love of his life and the mother of his children. The estranged couple fought in the final match of the tournament, as seen in X-MEN #15. And although Genesis proved to be the better fighter, Apocalypse’s will allowed him to prevail. 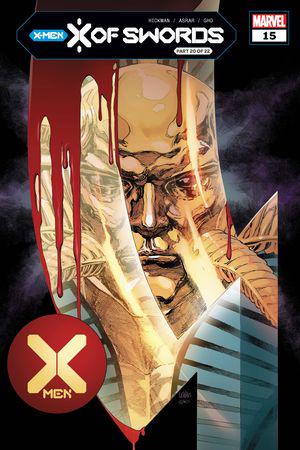 Losing the tournament meant nothing to Annihilation, who then signaled for an invasion to begin regardless of the outcome.

X OF SWORDS: DESTRUCTION #1 escalated the final battle with the arrival of Cyclops and Jean’s large group of mutants, as well as the reborn Captain Britain Corps. But once again, it came to Apocalypse to seize the day. Apocalypse put on the helm and briefly became the new Annihilation...just long enough to surrender to Saturnyne and halt the war. 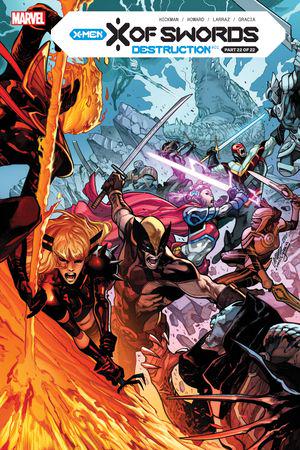 As a gesture of peace, Saturnyne transformed the helm of Annihilation into a more easily controllable staff. She also demanded that each side exchange mutants to keep the peace. Genesis asked Apocalypse to stay with her and their surviving children. In turn, Apocalypse released the entire mutant island of Arakko, as well as the millions of mutants who had been imprisoned upon it. If Arakko and Krakoa are now free to merge once again, then the population of the combined islands is about to explode.

So, what'll happen next? Keep reading the X-Men titles as the REIGN OF X begins!

Dig into these mutant mags at your local comic shop today!