Who is Orson Randall?

Take a tour through the life and legend of the man that once held the Iron Fist!

Danny Rand isn't the only one who's been the Iron Fist.

While readers have seen glimpses of others who had previously gained the power from the dragon Shao-Lau in the mystical city of K'un-Lun, the names and faces of those figures have mysterious until 2006's IMMORTAL IRON FIST. The first issue of that series—by legendary creative team Ed Brubaker, Matt Fraction, David Aja, and Travel Foreman—introduced audiences to Orson Randall, the man who preceded Danny as the Iron Fist!

Over the years, more has been revealed about Randall's connection to Rand, his pulp-inspired adventures all over the world, and the addictions that crippled him for decades. This is the story of Orson Randall...

Once Upon a Time 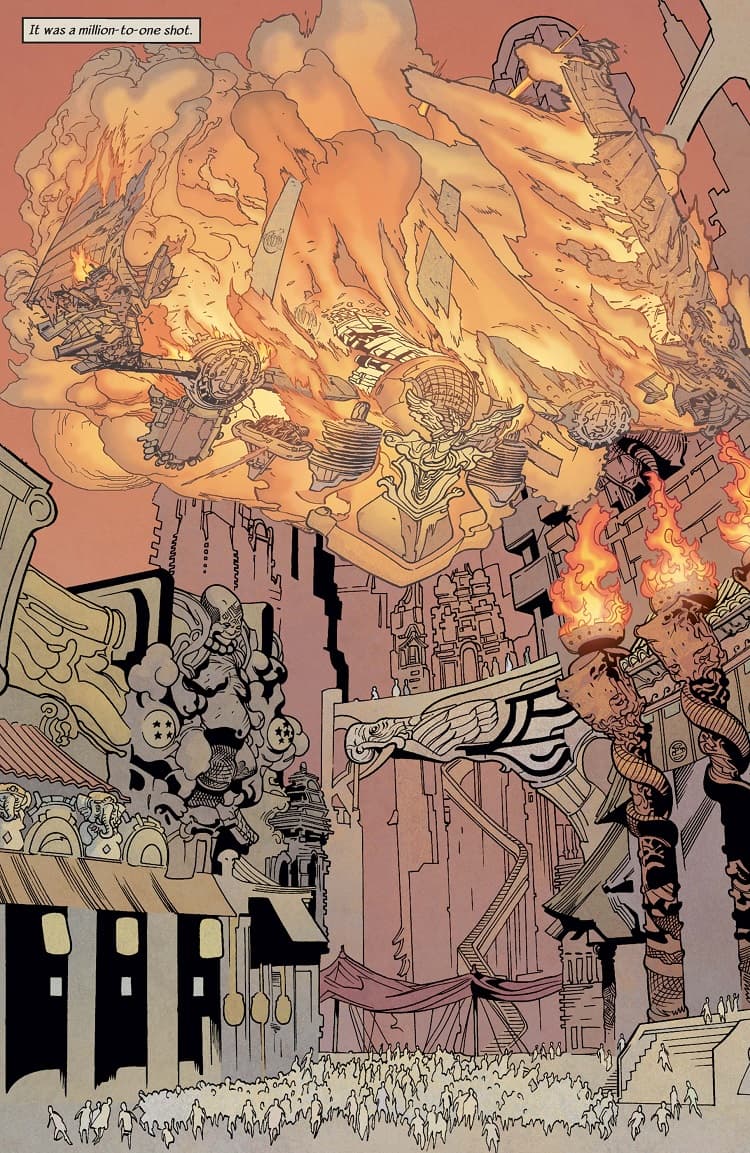 Phineas Randall was a genius inventor known for crafting the technology behind New York City's subway system during the early 1900s. Once, when traveling on an airship of his own invention along with his pregnant wife, the ship crash-landed in K'un-Lun. Lucky to be alive, Randall and his wife welcomed their son, Orson, to the world within the gates of the mystical city.

Though his parents left him there, Orson was welcomed into the local community, and raised as one of their own before eventually becoming the Iron Fist. After years of assuming he knew his father's life story, Orson was blindsided by the knowledge that his father was not an ordinary inventor; he actually built an entrance and exit from the Heavenly Cities to Earth.

Randall managed to work his way through the intensive training in K'un-Lun, and plunged his hands into Shao-Lau's heart to become the Immortal Weapon known as the Iron Fist.

When the Heavenly City next aligned with Earth, Orson transported himself into a world he'd never known and accidentally wound up mired in the horrors of World War I. After Randall was called back to K'un-Lun for a fighting tournament, he refused to battle. As punishment, the other cities agreed to attack him. During the ensuing melee, Randall killed another fighter before fleeing the city with a book filled with the history of the Iron Fist.

Escaping became a large part of Randall's general method of operation over the next few years of his life. Though, after turning to illicit activities to escape the pain of war and what he'd done on K'un-Lun, he managed to find new allies in his life, like biographer-turned-friend Ernst "Lucky Pierre" Erskine and young protégé Wendell Rand... 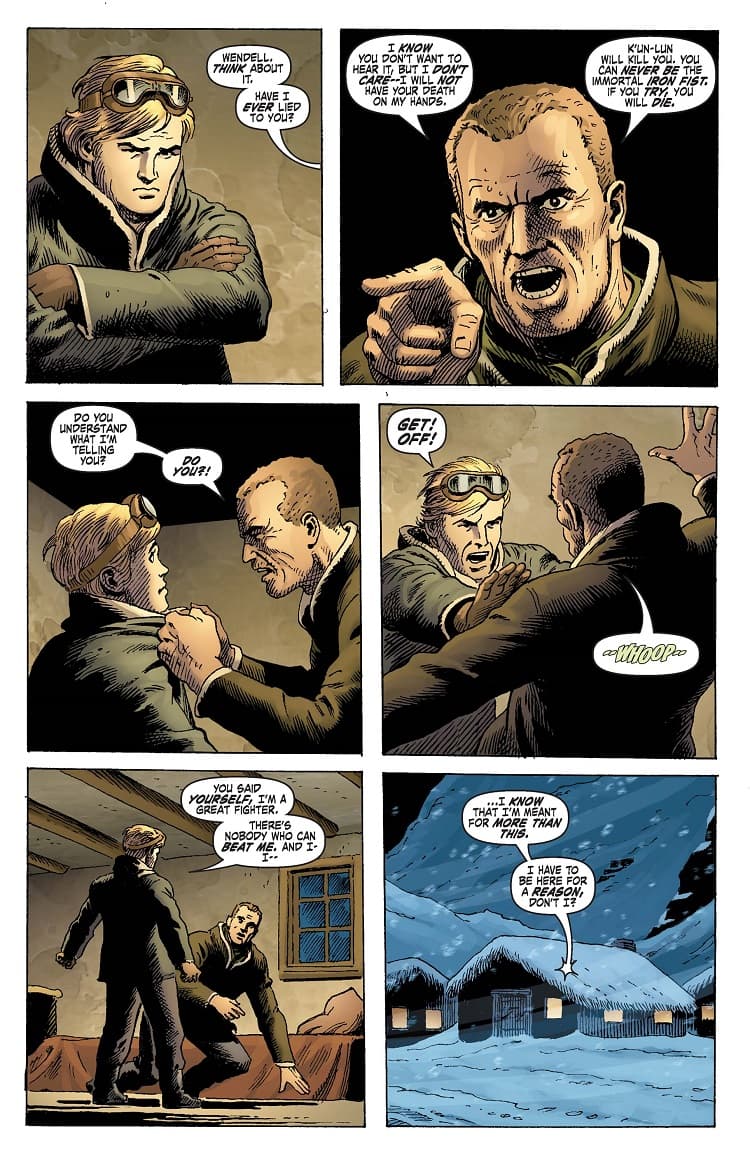 After ending up in Nepal, Randall was saved from poisoning by a random servant child. That child turned out to be Wendell Rand, the boy that would, years later, become Danny Rand's father. Orson took the boy in and trained him in kung fu, but constantly told him how dangerous the Iron Fist could be. Still, Wendell never stopped hoping to become Randall's successor.

Rand eventually left his father figure, found K'un-Lun, trained, befriended Davos, and even earned the right to face the Shao-Lau...but he couldn't shake Randall's resonant words and followed in his mentor's footsteps by running away. Wendell sought out Orson once more, only to find him in a burnt-out haze. Upon regaining his senses, though, Randall informed the young man that he knew from the very beginning that he wouldn't become Iron Fist—but that one day Wendell's son would.

Orson may have escaped from K'un-Lun, but he couldn't outrun the bounty put on his head by the rival Heavenly Cities that still wanted him dead. After being attacked by Bride of Nine Spiders and her Lightning Lord minions, Orson decided to go on the offensive against the world's evils and put together a group called the Confederates of the Curious, which consisted of his biographer Ernst "Lucky Pierre" Erskine, Wendell Rand, Contessa Vera Vida, Shadu, Chores MacGillicuddy, and Barko the dog. Over the years, they faced all kinds of danger together, with Randall using his powers to heal them more than once, giving them magically extended lives with the power of the Fist.

Orson Randall spent decades trying to forget the wars he'd been a part of, but he couldn't ignore his past any longer when an old foe from K'un-Lun, Crane Mother, sent her minions to test him. Still upset about the death of her champion decades prior, she made a deal with Davos in which he would kill Randall in exchange for the power to take on Danny Rand, who was now a young adult.

Orson made his way to New York City to find a worthy successor. After a getting-to-know-you fight with Danny, the two teamed up to take on the combined might of Hydra, Davos, and the Cranes. In the end, Orson sacrificed himself so that Danny could absorb his chi in order to have a chance against Davos and the other Heavenly Weapons during an upcoming tournament. More importantly, the elder Iron Fist provided his new successor with a history of their people.

Recently, in a "Damnation" tie-in issue of IRON FIST, Orson Randall surprised Danny and the rest of the world by appearing in a fight ring crafted by Mephisto. Upon reuniting, Randall told Rand that the demon D'Kay had offered him the chance to get his soul back if he could defeat 24 opponents in 24 hours.

Subject to the tricks and schemes of the demon, though, one of Orson's opponents turned out to be Danny's long-dead half-sister Miranda! To save everyone, Danny, Fat Cobra, Miranda, and Orson teamed up to fight the remaining 12 opponents in a battle royale. At the end of the fight, Orson realized he wouldn't be able to survive, so he once again sacrificed himself to take out the last three foes, once again gifting Danny Rand a new beginning.

Read up on the entire history of Orson Randall with Marvel Unlimited right now!