Who Is the Black Knight?

Get a background on the character as he appears in this week's 'Punisher Kill Krew' #4!

Frank Castle is on a mission and he needs the right people for the job. In PUNISHER KILL KREW, the vigilante intends on making the monsters from War of the Realms pay for what they did to the innocents of Midgard. To do that, he's already allied himself with Foggy Nelson and the Juggernaut. With this week's fourth issue, he's adding another member to his crew: the Black Knight.

The wielder of the Ebony Blade not only brings a great deal of experience to this mission of vengeance, but also a blood legacy of battle that will serve him and his comrades on their mission.

You see, while the Knight currently carries the mystical Ebony Blade, he finds himself in a position to do so because of a long and famous lineage. His family line goes all the way back to Medieval times and the brave crusader called Sir Percy of Scandia. Starring in THE BLACK KNIGHT for its full five-issue run between 1955 and 1956, this Atlas hero served King Arthur and Merlin against the realm's enemies (specifically Modred, who eventually felled the brave knight). 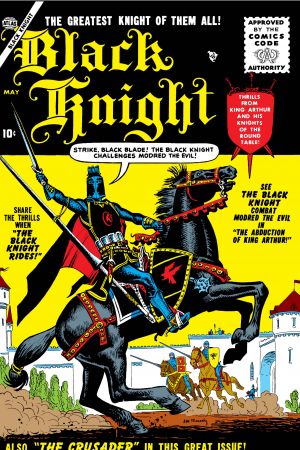 Chivalry must have skipped a few dozen generations because the next Black Knight to show up became a villain! Debuting in 1964's TALES TO ASTONISH #52, Professor Nathan Garrett was a scientist looking to sell secrets to the Russians when Giant Man captured him. He was tried for treason, but this bail was paid before he was secretly flown to a remote Balkan kingdom. There, he gazed upon the statue of a winged horse—and thus decided to make his own! Eventually succeeding in his experiments, Garrett also developed a high-tech lance and a new suit of armor. This new Black Knight did well enough against Giant-Man and the Wasp that he managed to escape prison on his flying steed.

Later that same year, Nathan showed up in AVENGERS #6 as part of the original Masters of Evil line-up. The Black Knight never had the criminal success he hoped for, though—either as part of a group or on his own. Then, in TALES OF SUSPENSE #73, Garrett fell from his horse while fighting Iron Man...

The following year, readers found out what happened to Nathan Garrett, but only after introducing the world to the new Black Knight in AVENGERS #47. A scientist researching "magnetic waves," the new hero seemed close to a breakthrough in his field. He explained to a colleague that Garrett was not only his uncle, but also the preceding Black Knight. He even confirmed suspicions that Nathan died in the fall. Now dedicated to making up for his family member's misdeeds, the new Knight emerged... 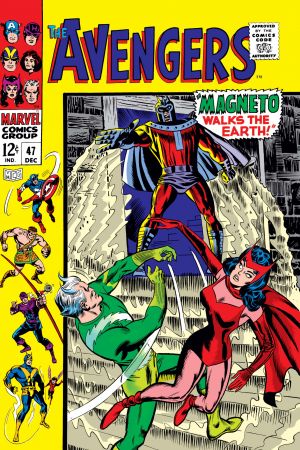 But it turned out that the new hero had been communicating not with aliens as presumed, but with Magneto—who he inadvertently brought back to Earth! The Master of Magnetism locked the Black Knight in a dungeon and then captured Quicksilver and Scarlet Witch! The speedster managed to send out an Avengers distress signal and the team came running in issue #48.

Not one to wait around for help, the Knight wandered around the secret passages of Garrett Castle. He further remembered his uncle's last moments... On his death bed, Nathan charged the new Black Knight with using his vast resources for good. From there he developed his own winged horse and puts his own spin on the costume and equipment.

Remembering the legend of the original Black Knight, the hero suited up and tried getting the Avengers' attention, but they mistook him for the previous incarnation of the Black Knight and attacked. After telling the team where their mates were being held by the Magneto, he flew off to live his own life...though he would eventually become a well-respected member of the team down the line.

With MARVEL SUPER-HEROES #17, the Knight traveled to England after giving up his heroic moniker. While touring a castle, he discovered a secret passage that led to a chamber wherein he lit a fire that called for Sir Percy's spirit! The ghost explained that the Knight now carried on the family legacy. 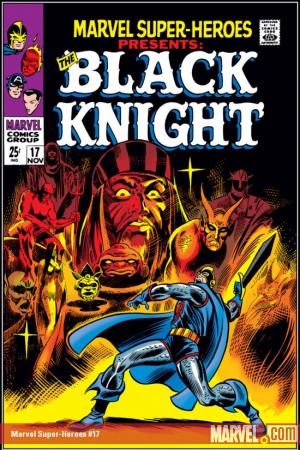 Percy also explained the origins of the mighty Ebony Blade, which Merlin fashioned from a meteorite. Nathan Garrett tried loosing it from its enchanted place in that dark crevice, but proved unworthy. The Black Knight did not fail where his uncle did, though, and picked up the weapon with ease, dedicating himself to doing good in the world.

And he's done exactly that as the Black Knight, a solo hero, and as a member of the Avengers, the Heroes For Hire, and even MI: 13! Now, he's helping a new group in PUNISHER KILL KREW—but with the same intent: righting wrongs.

Read more about the Black Knight on Marvel Unlimited today!