Writer Reginald Hudlin Asks and Answers the Question: "Who Is the Black Panther?"

Look back at a landmark run with the scribe who shepherded T'Challa through 'House of M,' 'Civil War,' and more!

Before Reginald Hudlin wrote the classic 1990 Kid n’ Play vehicle House Party, before he served as President of Entertainment for BET, and before the acclaimed producer teamed with Quentin Tarantino for the Academy Award-nominated Django Unchained, a Marvel stalwart ignited this titan’s creative spirit. Exposed to Silver Age comics via his brother and future collaborator Warrington, young Reggie encountered T’Challa, the esteemed Black Panther, when the hero first debuted in 1966’s FANTASTIC FOUR (1961) #52 by Stan Lee and Jack Kirby.

Hudlin fell in love with the Panther immediately, appreciating Kirby’s sleek design as well as Lee’s nuanced take on the African king. He would be influenced in his own work by that original tale, as well as the seminal BLACK PANTHER series written by Priest for Marvel Knights beginning in 1998, particularly appreciating the revelation that T’Challa first joined the Avengers “to spy on them of course! [Priest] made all of it make sense.”

Still, despite these classic contributions, Hudlin found the Panther’s appearances on the larger spectrum to be “wildly uneven,” but “always believed in the potential of the character” which he felt was “never fully realized.” In 2005, the longtime devotee of the Wakanda warrior got his chance to explore that potential.

“Paul Power is a storyboard artist who introduced me to one of my heroes in the medium, Neal Adams,” Hudlin recalls. “Neal was very generous with his time and felt I should meet with Marvel, so he set up a meeting with Joe Quesada and Axel Alonso. We talked for a while about comics, and at the end of the conversation [they] asked me what book I wanted to write. I was stunned, because that’s not why I was there. But I left with the assignment of writing a six-issue Black Panther [limited series].”

Overjoyed, Reginald shared the news with his friends and family, and found a familiar refrain: “Who is the Black Panther?” Realizing the character’s lack of visibility to the mainstream audience presented a challenge, he resolved to make that questions the heart of his work; indeed “Who is the Black Panther?” became the title of that first story. “I knew I had to write a story that told you everything you needed to know about him and told in a way that you could follow it even if it was the first comic book you ever read. I’m very big on accessibility.”

In terms of collaboration, the neophyte scripture sought out legendary artist John Romita Jr., who had made his name on every Marvel property from Daredevil to Spider-Man, but never tackled the Panther in any extended fashion. The duo met for lunch in Los Angles and hit it off. “I knew he was a brilliant artist, and I knew he worked fast,” notes Hudlin. “But what I didn’t know was he was such a great guy! We really clicked as people. It’s rare that anyone can be all three things. He’s very special. After confirming his interest, I went to Marvel and insisted he draw the book. And wouldn’t stop insisting until they gave in. It worked out for everyone.”

In crafting their Black Panther tale, Hudlin and Romita focused in not just on T’Challa, but his homeland, establishing and embellishing on the idea of Wakanda as a “special place” that resisted outside invasion attempts of any sort. The kingdom would become a character in the book every bit as important as any other.

Speaking of characters making their mark, in the second issue of BLACK PANTHER, we meet for the first time Shuri, the younger sister of our erstwhile royal, possessed of spirit and ingenuity that made her an early fan favorite and has brought fame both on the page and in multimedia portrayals across film and television. Hudlin had other motivations: “It made no sense to me that T’Challa would be an only child. Royalty always has an heir and a spare. I thought there would be a younger sibling, and that it should be a girl for maximum contrast. It made sense that she would be really smart and would ultimately inherent the title of Black Panther. That way my son and daughter would be able to dress up as Black Panther for Halloween.” 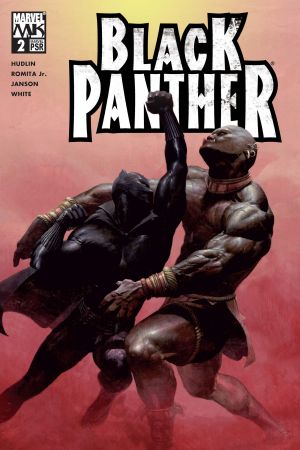 In terms of antagonists, longtime Panther arch foe Klaw made the most sense with the effort to establish Wakanda as he represented the “typical European invader.” Hudlin loaded up the villain side of the equation with “a cross section of [characters] each representing a different colonial power” including the United Kingdom’s Black Knight, the United States’ Rhino, and China’s Radioactive Man.

Once Hudlin completed the outline for the project, the Marvel powers-that-be responded with a simple question: What story would he tell next if he kept going? Fortunately for the writer, he had a concrete answer in mind involving part of T’Challa’s past driving towards his future: “As Prince T’Challa became King T’Challa, he would have to find a bride and start a family. We quickly decided that Storm would be the perfect match. So, the [limited series] became an ongoing series as we built toward that wedding.”

Revisiting the tale that launched Hudlin’s nearly four years with the character beginning in BLACK PANTHER #1 from 2005, the writer remembers several moments that stood the test of time with himself as well as fans: “There’s a conversation between T’Challa and a young boy who worships him. T’Challa explains the same God that empowers him also flows through the young man, so he can do anything. That really landed with people. 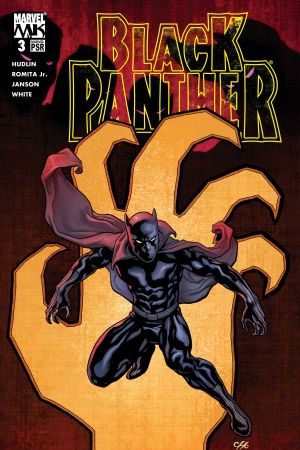 “There’s also a scene when T’Chaka, T’Challa’s father, tells off a group of powerful Europeans, and that clip of that scene from the [2010 animated series adapting the story] went viral and never stopped circulating. And finally, the fight scene between Black Panther and Captain America, which blew everyone’s mind in the comic and in the animated series. Because the Panther wins, decisively.”

Over a decade removed from actively writing the Panther, Hudlin will never be far from the legacy T’Challa has enjoyed across all mediums; he takes appropriate pride in his contributions to the expansive canon. “Between the comic books, the animated series I did that was based on the books, and the movie that took inspiration from both, ‘Who is the Black Panther?’ has become the definitive Black Panther origin,” he states. “Shuri is not only canon, but one of the most popular characters in the Marvel Universe. All that is very satisfying.”