Get the details on why NASA decided to name the star patterns after these iconic Marvel ideas!

On October 17, NASA announced that two new constellations have been named after the Hulk and Thor's hammer, Mjolnir! 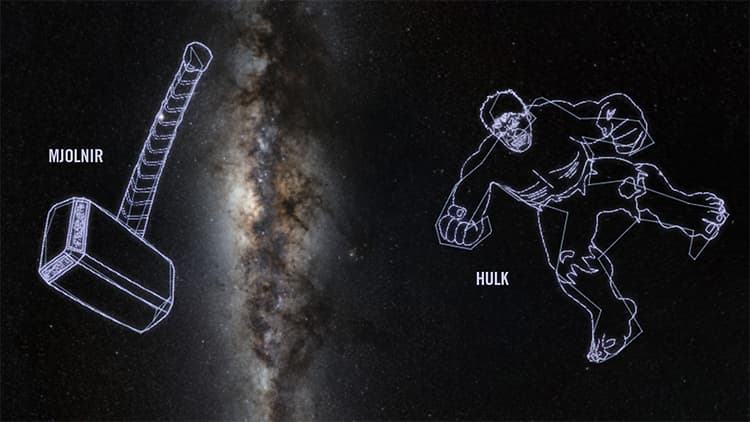 Scientists with NASA's Fermi Gamma-ray Space Telescope have detected 21 new constellations constructed from sources in the gamma-ray sky, and to mark ten years of the telescope's operation, they decided to unofficially name a couple after these famous Marvel figures. Appropriately, they named one after the gamma-irradiated hero himself, the Incredible Hulk! "Gamma rays are the strongest form of light," NASA detailed. "They pack enough punch to convert into matter under the right circumstances, a transformation both Banner and the Hulk would certainly appreciate."

Taking inspiration from the otherwordly God of Thunder, NASA also named a collection of celestial points after Thor's hammer, Mjolnir. They explained, "This constellation symbolizes Fermi's work investigating Terrestrial Gamma-ray Flashes (TGFs) associated with lightning from thunderstorms on Earth." And what better way to mark the discovery than with the mystical mallet that can command the skies.

Many of the 88 traditional constellations that map the night sky have been named after ancient mythological figures, like Hercules, Pegasus, and Orion. Today, as new astronomical objects are discovered, NASA has chosen to name them in honor of modern myths and stories, sourced from the pages of comic books and cast into the stars.