The King leaves his mark on a Wild West legend—Marvel style!

We all know that Jack Kirby revolutionized the world of super heroes with his dynamic work at Marvel, but it’s important to also remember how he brought those same talents to sci-fi, horror, war, and even western stories. Not long ago, we highlighted Stan Lee and Kirby’s work on RAWHIDE KID, but the dazzling duo also teamed up to put an interesting twist on the title hero in 1962’s TWO-GUN KID #60.

While the gunslinger had existed prior to the Lee-Kirby issue in question, they brought a new version to life in the form of Matt Hawk, a lawyer from the east who moved to Tombstone, Texas. Upon arrival, he immediately garnered the attention of some local ruffians as well as schoolmarm Nancy Carter.

Not long after realizing that his new town didn’t exactly crave a new lawyer, Hawk witnessed a group of bullies hassling an old man named Ben Dancer who used to be the fastest gun in the west. Matt ran out to help which gave the old timer a chance to show that he still had some of those vaunted skills.

After formally introducing themselves to each other, Matt and Ben became friends, with the elder of the pair teaching the younger the ways of sharpshooting and other classic cowboy skills such as using a lasso and jumping on a running horse. In a nod to another classic Marvel hero, Hawk later admitted that he moved out west because his doctor deemed him too weak.

With their training over, Ben urged Matt to take on a secret identity to use his new skills and thus the black-and-orange clad Two-Gun Kid came to life! If you’re wondering about the previous version from the prior 59 issues, don’t worry; in this story, the original existed as a character in stories that Matt read! 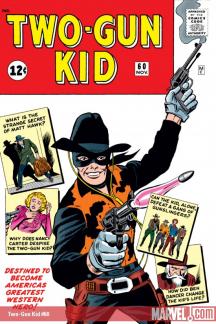 Having passed on his knowledge, Ben planned to head east, but got stopped by the bandits he took on earlier in the story. When his mentor’s horse rode back into town by itself, Matt knew trouble brewed, put on his new duds, hopped on Thunder and took off.

Appearing as if from nowhere, the Kid took out a few of the bad guys before they knew what hit them and then used his skills to disarm and ultimately beat down the villains. In the process he spared Clem Carter, who just so happened to be Nancy’s brother!

Though Stan and Jack would only team up for the next few issues of TWO-GUN KID, they laid down a new template for others to play with, giving Matt Hawk many of the same problems as one of the modern super heroes that continued to grow in popularity thanks in large part to that classic Kirby style!