The mechanical machinations of the Unhuman endanger innocents everywhere!

The search for a better body appears to be universally common as seen in the pages of TALES TO ASTONISH #21. The kick-off story began with an alien crashing in Africa and leaving his ruined frame in search of a more powerful one. This Stan Lee-Jack Kirby entry from 1961 introduced the world to an alien named Trull who sometimes goes by “The Inhuman,” others “The Mighty,” and still more “The Unhuman.”

After the introduction, the action then cuts to an architect called Phil who fled the United States after his latest bridge collapsed. “I retreated from the world and from myself!” he explained. “I devoted my time to designing useful machines, for use in distant parts of the globe where I would be unknown, unrecognized!” That brought him and his latest invention, a steam shovel, to Africa. As you can imagine, it didn’t take long for Trull to find and inhabit the powerful piece of equipment and start causing trouble.

In fact, the only thing standing between Trull and his desire to conquer the world, starting with Phil and his crew, proved an elephant that the builder had saved earlier in the adventure! The beast offered enough of a fight to break the machine’s engine cylinder which released all of the steam, sending Trull on a quest to find another body. 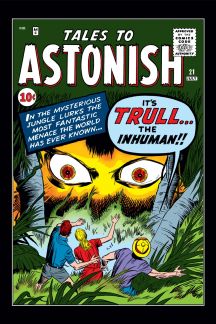 After not showing his “face” for decades, Trull started popping up again in the 2000’s. Jason Aaron included the big chap in GHOST RIDERS: HEAVEN’S ON FIRE as part of a group of anti-Spirit of Vengeance villains. Apparently he either found another steam shovel or figured out a way to fix Phil’s because that’s the shape he’s assumed since.

Just last year he appeared in CIVIL WAR II: CHOOSING SIDES #1 in which he attempted to build a family of smaller machines. This interrupted a Damage Control operation, but instead of throwing down, the group offered Trull and his kids a spot on the team!

Craving another bit of informational goodness? This particular issue of TALES TO ASTONISH also happens to be the first one to feature the Marvel Comics logo instead of the previous Atlas one! Take a look at the top left corner of the book and you’ll see a white rectangle with an M above a C. That’s the forebear of the classic version you’re so used to seeing these days.

Tomorrow, see how Orrgo made the leap from classic monster to a major part of HOWLING COMMANDOS OF S.H.I.E.L.D.!