7 Characters That Have Hosted the Phoenix Force

As the Phoenix enters 'Cosmic Ghost Rider Destroys Marvel History', look back at its past hosts!

Throughout the years, some pretty eclectic characters have played host to the Phoenix Force. As the cosmic representation of passion and life, this fiery entity can do some wild things to those it joins with. Right now, one of the wackiest characters in the Marvel Universe can be seen palling around with the Phoenix Force in COSMIC GHOST RIDER DESTROYS MARVEL HISTORY #3 by Paul Scheer, Nick Giovannetti, and Nate Stockman.

Though the Frank Castle-turned-Ghost Rider-turned-Herald of Galactus might be the least conventional choice, we're going to explore a few of the most interesting, important, and unusual Phoenix hosts ever!

The current run of AVENGERS introduced readers to a super team that existed on Earth way back in 1,000,000 BC! One of the stalwart members was Lady Phoenix, a red-headed human who possessed the Force. In addition to helping fell rogue Celestials, she also began a romantic relationship with the team's de facto leader, Odin.

As recounted in UNCANNY X-MEN #479, the Phoenix joined forces with a Shi'Ar by the name of Rook'Shir only for a few days. He did not handle the partnership very well and became a ridiculously powerful intergalactic outlaw with an enormous sword he could focus his power through. The very first Shi'Ar Imperial Guard was created to stop him and they succeeded, but a fragment of the Force's power remained in his trademark weapon. 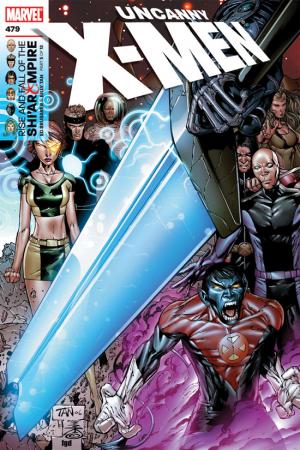 When those in power realized that only someone from Rook'Shir's bloodline could wield the weapon, most of them were killed. However, the last of the line, Korvus, was released by his own people to attack the X-Men.

The most famous of the hosts is none other than founding member of the X-Men, Jean Grey!

In UNCANNY X-MEN #100, she used her incredible mental powers to learn how to fly a spacecraft and then use her telekinetic powers to shield her from the radiation to save her friends. She steered them home safely, but in the following issue her dying mind was heard by the Phoenix who came in and powered her up. Taking on the codename Phoenix, Grey continued serving with the X-Men until outside forces looking to corrupt her lead to the Dark Phoenix incarnation which destroyed an entire solar system and lead to a trial overseen by the Shi'Ar. Though Jean's died her fair share of times, she always seems to share a connection with the Force.

The daughter of Scott Summers and Jean Grey from the DAYS OF FUTURE PAST timeline, Rachel Summers became united with the Phoenix Force on a return trip from the past. Eventually she made her way into Earth-616 and became a longtime member of the X-Men and Excalibur. Her connection with and possession of the Phoenix Force lead to many problems, including a full scale attack from a Shi'Ar squad and the wholesale slaughter of every Grey but her and Cable.

Later on down the line, Rachel went to space on a mission lead by Charles Xavier to track down Vulcan. During the mission, she met Korvus, who was sent to kill her, but instead the spark of Phoenix in his sword rekindled her own Phoenix-enhanced powers during UNCANNY X-MEN #478-486. Since then, she and Korvus have traveled the spaceways to continue using their pieces of the Phoenix Force for good.

The antagonistic young mutant telepath Quentin Quire was initially mentioned int he same breath as the Phoenix Force in the last arc of Grant Morrison's NEW X-MEN run. Shortly after, in X-MEN: PHOENIX ENDSONG, he was brought back to life by a piece of the Force and even became one with it for a short time.

In other tales, versions of Quire from the future were seen wielding the Phoenix Force with relative ease. Later, when the Shi'Ar weaponized the cosmic power in their war with the Asgardians, Quentin made a deal to take on a part of the Force and even became a Shi'Ar god for a brief time before returning to Earth and using up the rest of his Phoenix power to remove Jubilee's vampirism.

During AVENGERS VS. X-MEN, the two teams had very different ideas about what to do about the impending return of the Force. Cyclops wanted to use it to restart the sputtering mutant race while Captain America decided to end the threat. The Avengers' plan to kill the Phoenix Force ultimately failed, splintering it into five pieces that entered Cyclops, Namor, Colossus, Magik and Emma Frost.

They soon learned that taking out their fellow Phoenixes would give them even more power, and Cyclops winded up being the last one standing. He then killed Professor X and began to burn the world, but Hope Summers and Scarlet Witch managed to not only magic-away the Force, but also restart the mutant gene. Cyclops became the Phoenix once again in SECRET WARS, but even that power could not stand up to God Doom who quickly killed the mutant.

When it comes to people nobody wants near the Phoenix Force, Thanos' is usually pretty high on the list.

So, when his half-Inhuman son Thane stole a Phoenix Egg, died, and woke back up with the power flowing through him, it was bad news! Luckily, he focused much of that rage on his own father who he quickly bested. However, their next encounter found them both tumbling into a mysterious place known as the God Quarry overseen by the Coven. In order to make the fight fair, they separated Thane from the Phoenix Force.

Peach Momoko Breathes New Life into the Phoenix Force in 'Demon Wars: Down in Flames'

This February, it’s Phoenix vs. Magik as Peach Momoko’s 'Demon Wars' rages on!

The True Origin of Thor Odinson

Discover how the events of 'Avengers 1,000,000 BC' #1 led to the birth of the Marvel Universe's resident God of Thunder.

The History of Black Panther and Namor

Revisit the good, the bad, and the ugly between Wakanda's king and the underwater monarch!