A History of Accusers and Captain Marvel's New Role

Carol Danvers is about to take on the role of Accuser -- see who held the hammer before her!

Carol Danvers has some choices to make as Empyre brings war to her doorstep.

With the combined forces of the Kree and Skrulls approaching with wrathful intentions, how will Captain Marvel respond? Tipped off to the conflict between those races and the Cotati in INCOMING and agreeing to stand with the tree-like beings in EMPYRE: AVENGERS #0, Danvers may be looking at other options in the pages of her solo series.

In CAPTAIN MARVEL #18 by Kelly Thompson and Cory Smith -- on sale Wednesday, July 29 -- Carol will be taking up the role as Supreme Accuser as well as the Universal Weapon that comes with it. We'll have to wait a few weeks to find out what all this means for the Human-Kree hybrid and her many allies, but for now we can dig into the history of the Kree's Accusers and the Ultimate Weapon itself.

Ronan the Accuser made his debut back in 1967's FANTASTIC FOUR #65. In the previous issue, three quarters of the team took on a Kree Sentry. In retaliation, the Kree Supreme Intelligence sent his agent to the backwater planet.

Ronan brought the team to his Cone of Invulnerability and explained that, in addition to accusing, he also laid down judgements and punishments. However, the Fantastic Four worked together to stop him from laying down his sentence. That had never happened in the history of the Accusers! 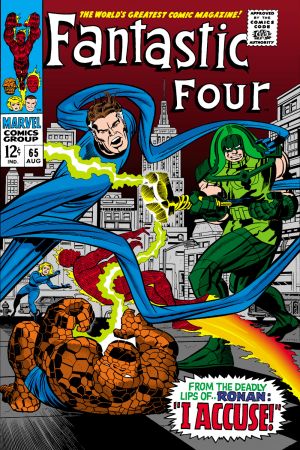 Ronan wielded the Universal Weapon in that battle. It created a field around the Thing that could infinitely increase the pressure around the bruiser. The Kree then used it to absorb the Human Torch’s flames and stunned Mr. Fantastic so he could no longer control his stretched-out limbs. The Accuser claimed that his "simple weapon" can both destroy and create matter at will.

Though Ronan became the highest-ranking Accuser, others served under him, and later, in his place. Charged with upholding Kree law across the galaxy, an Accuser felt completely justified traveling to planets and bringing down judgement on its citizens, even if they had no idea the Kree even existed, as was the case when Ronan first met the FF.

More recently, during the Black Vortex affair, the Kree homeworld of Hala was destroyed. From there, Ronan felt lost. As seen in ROYALS, he returned to his planet and wandered the wreckage speaking the names of the dead, honoring them as he could. When the Inhuman royal family appeared, he used new powers acquired from the Black Vortex to use their past sins to torment them. When he realized that he was truly at fault, he sought to punish himself. Instead he watched over the newly generated Supreme Intelligence, Plex.

Shortly after, a group of Kree explorers returned to find Hala desecrated and began turning Ronan into a cyborg. When Black Bolt found him, the former Accuser asked for a mercy killing, which the King of the Inhumans granted.

With so much going on in the world of the Kree, it's no wonder they decided to take drastic measures to move their society forward. To that end, it seems like Captain Marvel will be picking up the Ultimate Weapon where Ronan left off and deciding how she'll use it from there!

To find out what happens, check out CAPTAIN MARVEL #18 when it goes on sale Wednesday, July 29!