A Traveler's Guide to the Spider-Verse

Get a retrospective look at the greatest-ever Spider-Man events and crossovers!

With SPIDER-GEDDON coming to its wild conclusion later this month, we're looking back at the most significant Spider-Man team-ups and crossover events of all time!

All Peter Parker has ever wanted was a family. He lost his parents, his uncle, and his first love—all tragically—and yet he never gave up...at least not for long. In Part 1 of this series, we introduced his often fleeting connection to teams like the Fantastic Four and the Avengers, as well as other heroes like Deadpool, Venom, and even Carnage. Part 2 tackled about the changes to the timeline in the universe of Earth-616, and with it worlds where Peter had a family—a wife and children—only for each to get erased from the face of reality. This has happened more than once to the Peter Parker of Earth-616... Blame it on that ol’ Parker luck.

Last time, we talked a little bit about the concept of Spider Totems, the Great Weaver, and the Web of Life and Destiny—all components of a greater mystical destiny for all spider-themed heroes in the Multiverse. Now we’re going to jump right in and meet some of those alternate universe Spideys and their own crossovers and team-ups. Starting with...

The Ultimate Universe, also known as Earth-1610, was created in 2003 and seemingly wrapped up in 2015. The universe existed before introducing Miles Morales and much went on before he came onto the scene, but it should be noted that Miles is one of the only heroes to make the crossover to the main continuity. Miles’ first appeared in ULTIMATE COMICS: FALLOUT #4, which took place after the Ultimate Universe event Death of Spider-Man, in which Peter Parker dies in a showdown with the Green Goblin. 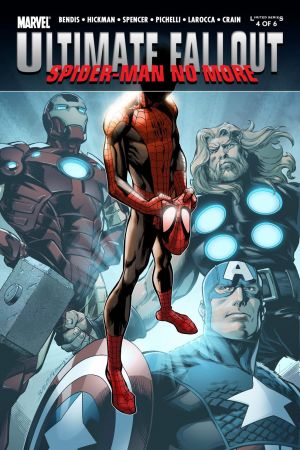 Miles received his powers when an Oscorp scientist used Peter Parker’s blood to recreate the original radioactive spider. One of these lab-engineered super spiders bites Miles Morales, who was in grade-school at the time. Afraid of his powers and the idea of putting himself in danger, Miles is only spurred on to try his hand at heroics after witnessing the death of Peter. He’s taken in by S.H.I.E.L.D. and given a new costume—and the support of the Super Hero community at-large—as the new Spider-Man. He gets the blessing of Ultimate Peter Parker’s loved ones and even the Earth-616 Peter himself during the crossover miniseries SPIDER-MEN. Miles and this version of Peter would join forces again a few years later in SPIDER-VERSE and SPIDER-GEDDON—but before those events there were some SECRET WARS to contend with...

When an incursion event of absolute destruction brings two universes—Earth-616 and the Ultimate Universe—together, heroes and villains alike are scrambling to stop it. When the end does come, all that remains of the Multiverse is a Battleworld pieced together with shattered remnants of each reality. Some survive the devastation, but barely, and Miles Morales is one of them. After a battle to gain enough power to take back Battleworld from a power-mad Doctor Doom, the Multiverse is then reconstituted by the likes of Molecule Man, Mr. Fantastic, and Black Panther with some help from the Reality Stone and the power of the Beyonders.

When all is said and done, Mile Morales and his mother (brought back to life by Molecule Man in thanks for giving him a hamburger) are relocated to Earth-616 along with brand new memories of their lives within this continuity though memories of his old universe resurface in time, Miles and Peter go on patrol together—in this new continuity Miles usually handles local matters around the New York area while Peter acts more globally—as the Fantastic Four painstakingly rebuild the multiverse reality by reality.

Earth-616’s Gwen Stacy was Peter Parker’s first love, murdered by the Green Goblin back in “The Night Gwen Stacy Died”. Since then, she’s been cloned a bunch over the years, and her death has also been averted in four different WHAT IF? stories.

The Gwen Stacy of Earth-65 is an interesting test case, then. In her universe, Gwen was the one granted with spider powers and Peter Parker eventually died under somewhat tragic circumstances instead. She uses her powers to fight crime much like Earth-616 Peter, but she also has her own distinct personality. Gwen—who's gone by the Super-Hero names Spider-Woman, Spider-Gwen, and Ghost-Spider—played as a drummer in MJ Watson’s rock band and must go against her own father, the police chief, on many occasions as she becomes known as a public menace. 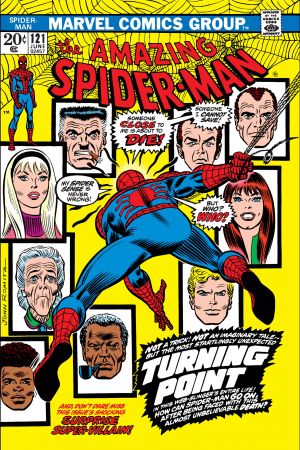 Her initial appearance in EDGE OF THE SPIDER-VERSE #2 carried over into SECRET WARS and her popularity was so great in each that she was given her own series in 2015, THE RADIOACTIVE SPIDER-GWEN, and starred in the SPIDER-WOMEN crossover series with Cindy Moon and Jessica Drew. She jumps across the Multiverse again in crossover team-ups such as WEB WARRIORS and DEAD NO MORE: THE CLONE CONSPIRACY, and of course she is prominently featured in SPIDER-GEDDON.

SPIDER-VERSE is when everything goes down. For the first time, all the favorite members of the spider clan from across the multiverse—favorites like Spider-Gwen, Miles Morales, Spider-Man 2099, Spider-Ham, and more— get to bond, fight the evil Inheritors, and for many of them discover what it means to have a great big extended family. Supernatural concepts like Spider-Totems, the Web of Life and Destiny, and a vampiric totem-hunting clan called the Inheritors return from 2005’s iconic crossover arc “The Other” as spider-people from all walks of life, time periods, and dimensions converge for one common goal: survival.

The series was the first giant spider-event of its kind and ended with the Inheritors defeated and imprisoned on a post-apocalyptic world...but the battle was not without its casualties. Dozens of spideys fell in the fight, which inspired some of the survivors to create a group called the Web Warriors and work to protect the Web of Life and Destiny from any future attacks. The Venom-themed crossover VENOMVERSE was inspired by this event and SPIDER-GEDDON is a direct sequel to SPIDER-VERSE, picking up the threads from the last story.

May “Mayday” Parker’s story begins during the 1994-1996 CLONE SAGA storyline in the main continuity when MJ discovers that she is pregnant. Some clone shenanigans occur, and after all is said and done, the baby is sadly stillborn. That would have been the end of the matter if not for WHAT IF? #105 where the question “What if Mary Jane had never lost the baby, and Spider-Man had a Spider-Girl?” with a 15 year-old May developing spider-powers of her own. The Peter of this universe, Earth-982 (also known as the MC2), never told May about his time as Spider-Man (which had ended by the time she was 15) so poor May is flying blind as Spider-Girl!

May doesn’t use her powers exactly like her father; she uses her Spider-Sense to find out when her enemies are the least dangerous and attack them there, she can repel objects as well as cling to them, and even stick people to objects she’s clinging to as well. May also works to fight her foes by rehabilitating them, as in the case of Normie Osborn; in his words, May’s greatest power is her ability to form friendships. In this way, she differs most from her father whose past traumas always made it difficult for him to form meaningful and lasting relationships with friends or romantically. 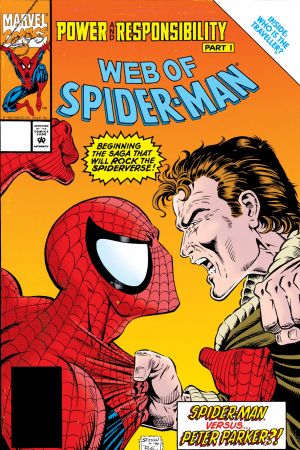 May was featured in the 2014 SPIDER-VERSE crossover event wherein her father died saving MJ, her boyfriend Wes, and his kids from the Inheritors’ attack. At the end of the SPIDER-VERSE adventure she returns to her home dimension to reunite with her mother and Wes, bringing an Uncle Ben from Earth-3145 back with her. From then on, she goes by the name Spider-Woman and appears again in 2015’s SECRET WARS event as well as the latest SPIDER-GEDDON tie-in SPIDER-GIRLS.

This article would be a giant waste of time if one of the greatest spider-iterations out there, Spider-Ham, was not acknowledged.

He appeared for the first time back in November of 1983, in a one-shot called MARVEL TAILS STARRING PETER PORKER, THE SPECTACULAR SPIDER-HAM. The story tells the tail—er, tale, tale—of a spider named Peter living in a world where animals are anthropomorphic. Peter the spider is bitten by a radioactive pig, and the rest is story; “This is astounding! Am I a spider with the limitations of a pig? Or a pig with the proportionate strength and agility of a spider? I've become something greater than either spider or pig... I've become a Spider-Ham!"

Spider-Ham has teamed up with Captain America, fought Ducktor Doom, and even a zombie threat before being catapulted into the SPIDER-VERSE with the rest of the spider-folks.

SPIDER-VERSE revealed just how all the spider-family were connected by a mystic force greater than themselves—the Great Web of Life and Destiny—and just how much could be at stake if the Great Web were to be threatened. In SPIDER-GEDDON, the Inheritors are back thanks to the carelessness of Superior Octopus. They’ve escaped their bonds and now, out for revenge, they’re seeing red. Peter faces off against longtime foe Morlun while his protégé Miles Morales steps up to lead their increasingly divided ranks of the spiders.

Over the course of SPIDER-GEDDON so far, our heroes have been split up, betrayed, and some have even lost their lives. The final battle is coming, and with it, perhaps the end of the Spider-Verse as we know it. After everything else these spider-people have endured, they finally found a family...and now they have to fight for it.