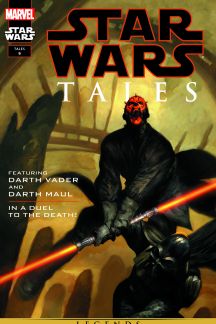 Of all 24 issues of STAR WARS TALES, perhaps no single story better embraced the idea of creating noncanonical stories that fans really want read better than “Resurrection” in issue #9 (2001). Here’s all you really need to know: Darth Vader versus Darth Maul.

Ron Marz’s story begins with Vader and a squad of stormtroopers landing on Kalakar Six, a Mustafar-like lava planet, where a tip has led them to tracking down Rebels said to have stolen the Death Star plans. Turns out, it’s a trap laid by a cult of Sith followers who do not believe that Vader was meant to be Palpatine’s true apprentice, and—oh, yeah—they’ve resurrected Darth Maul to do something about it. Rick Leonardi’s pencils beautifully illustrate the epic duel to follow—one of the best lightsaber fights ever written into comics.

Of course, it has since been revealed through “The Clone Wars” and “Rebels” that Maul survived his encounter with Obi-Wan, but a canonical Vader versus Maul lightsaber battle never actually occurred. Luckily, fans craving an awesome showdown between Sith Apprentices can always turn to STAR WARS TALES #9 to scratch that itch.