Get some downright delightful details from across the history of the merry Marvel Multiverse!

Why Crusher Creel? How about this: he’s appearing in next week's brand-new IMMORTAL HULK #9 and, true to his nutty nature, it’s up in the air whether or not he’s a died-in-the-wool baddie or just a guy trying to catch a break… Follow along and we’ll try to explain!

Well, he didn’t win ‘em playing poker! Way back in JOURNEY INTO MYSTERY #114, the Asgardian god of mischief Loki sought a way to give his brother Thor a hotfoot, so to speak, and snuck an enchanted potion into ex-boxer-now-convict Carl “Crusher” Creel’s drink. The rest is harrowing history: Creel gained the amazing ability to absorb the properties of anything he touched and change his entire body into those things. And with them, he did the very first thing on his mind—and escaped from prison. 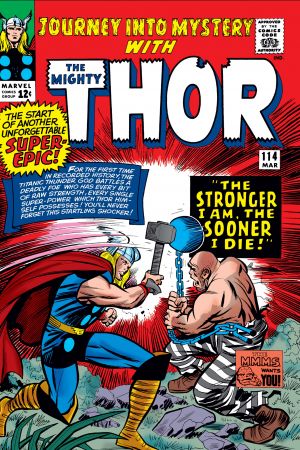 And then he battled Thor. And then the Hulk, and the Avengers, Daredevil, Spider-Man, Quasar, the Inhumans…well, you get the picture, right? All because of that magic swig of milk or whatever Carl drank. Later, Loki laid it on the line and explained the enchantment to the Absorbing Man—heck, at one point he even took the blamed powers back from Creel, but he always seemed to gain ‘em back. We guess it’s just…magic!

Didja Know… “Crusher” Creel’s turned into some wonderfully weird things over the years?

Yep, it’s true. Oh sure, he can transform into stone and metal and gases and what-have-you, but every once in a while Carl gets a bit, let’s say, creative and the kid gloves are off. The Absorbing Man’s on the march and he’s packin’ power to become anything!

A few cases in point: In 1999's CAPTAIN AMERICA #24, Creel teamed up with Crossbones to slap Cap around, but when a bomb dropped into the frame, the Absorbing Man touched the hero’s frankly famous shield to literally shield everyone from the explosive. See, Carl’s got a heart underneath all that muscle and magic hoodoo, and sometimes he just can’t deny it. 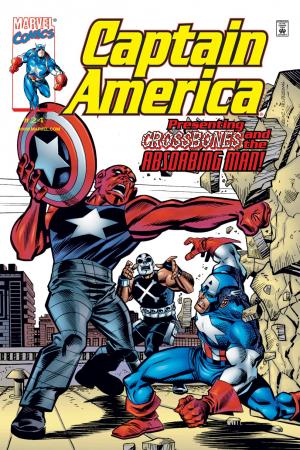 Then, in MARVEL KNIGHTS: SPIDER-MAN #16-#17, Creel took on the properties of an illegal narcotic! For a short while there anyone who breathed in the stuff got the Absorbing Man’s powers and…oh, geez, you hadta be there, okay!?

Finally, Carl once touched a tiny piece of one of those crazy Cosmic Cubes in MIGHTY AVENGERS #32. Now that you gotta see for yourself, True Believers! It transpired due to our ol’ pal Loki and boy did that make a scene! Creel possessed the power to do just about anything, per the Cube, and the Avengers stood in his way. Yes, it's as cool as you imagine it!

We’re romantics at heart and, as it turns out, so too is the Absorbing Man. While stuck on the batty Beyonder’s bouncing Battleworld during the original SECRET WARS, Carl met a super-strong siren named Titania and while sparks of a different kind than the romantic variety flew at first, they eventually saw each other in a new light and love blossomed in THOR #436. From then on, the two seemed incredibly inseparable. 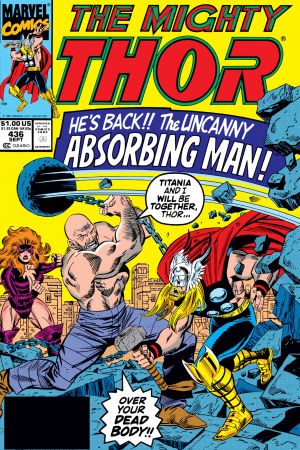 Now, maybe love’s the balm for the soul even crooks need, ‘cause Creel and Titania tried to go straight after teaming up to tussle with titans around the world and even decided to tie the ever-lovin’ know in AVENGERS UNPLUGGED #4. Sadly, once a baddie always a baddie, perhaps, and the happily married malcontents fell back to their old ways and then they separated and got back together.

Listen, just believe us when we say Carl Creel’s a big softie on the inside and he’s always going to bounce back and forth between battlin’ crimebusters and really trying to walk the straight-and-narrow. Who says this ain’t the Marvel Age of Loony Lawbreakers?

In this article: Absorbing Man