Didja Know... The Crossover History of the X-Men and the Fantastic Four

Hey, True Believers, how about that big battle between the fightin’ Fantastic Four and the merry mutants of the X-Men, huh? What? Oh, sure, we might be yakkin’ about the all-new X-MEN/FANTASTIC FOUR series, but we’re really referencing the very first time the two titanic teams tussled—oh, the heck with it! We’re really jawin’ about both! Who sez this ain’t the Marvel Age of living in the past and the present all at once?

So, strap yourselves in and steel your souls as we zoom back in time to the now-legendary FANTASTIC FOUR (1961) #28 and witness whatever we wish! Meaning, your Didja Know dictators are in charge now, Charlie!

Didja Know… the FF and the X-Men fought each other to a standstill?

If we know you crazy kids and your love for action, amigos, we’re gonna jump right to the good stuff—namely, the big brouhaha itself! And believe us when we say the Earth quaked not just a little on that decisive day…

Wait, did we say decisive? Not exactly, effendi! Once the dastardly villains—more on them in a bit—set the stage for the slugfest and dance partners squared off, it turned out neither team reckoned on the other’s prowess on the dance floor! In Round One, Cyclops fanned the Torch’s flames, Marvel Girl spun the Thing like a top, and Mister Fantastic out-bounced the Beast…in fact, only the Angel and Iceman won a prize by capturing the Invisible Girl, and that, our fearless friends, is what led to Round Two!

Later, on a desolate, lonely plateau in what Johnny kindly called “Nowheresville,” the Fantastic Four once more marched on their x-citing foes, the X-Men. And it was Cyclops vs. the Thing! Invisible Girl vs. Marvel Girl! Mister Fantastic vs. the Angel! The Human Torch mad at everybody! Of course, for the second go-'round one garrulous group had to out-fox the other, but, as fate would have it, a clever set of booby traps sprung from several hatches turned the tide against Reed, Sue, Ben, and Johnny. Oh, the unfairness of it all! 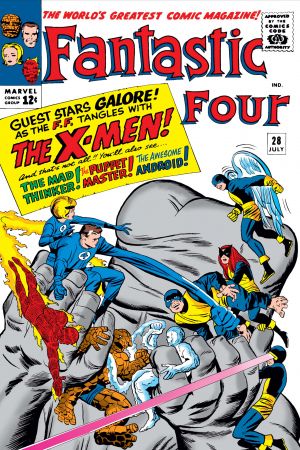 Didja Know… the Mad Thinker had never teamed up with the Puppet Master before?

Sure, nowadays the two nogoodniks are the couple du jour—ha, in their wildest dreams!—but before FANTASTIC FOUR #28 the Mad Thinker and the Puppet Master were strangers to each other. This little misadventure kicked off a partnership that would continue unabated for years to come.

It started when Maddy summoned Puppy—they hate it when we call ‘em that!—to his lair and laid a little reality on his bald pate: Separately they stunk, but together they would triumph! See, the Thinker thunk some thoughts and that told him a Puppet Master Special would be just the ticket to get the X-Men to clobber the Fantastic Four…and two bombastic birds would be buried as one. Puppy started right in with his radioactive clay and in frighteningly fast fashion, he’d brought Professor X under his thumb, and the X-Men along with him.

Here’s a fun tidbit: At the end of this adventure, the two baddies didn’t quarrel, didn’t betray each other, didn’t even try to shoot at one another—clear violations of the Rules of Villainous Conduct, we know, we know—but quite quizzically they escaped their enemies and with only a few slightly harsh words over their foolish failure, they slunk off, still partners!

These days, the entire Earth knows all about Professor Charles Xavier, but back then his very existence was a seriously kept secret. And somehow, though Chuck sat at the heart of the entire sit-rep of FANTASTIC FOUR, by its wondrous wrap-up, only his X-Men knew who and where he was.

That’s amazingly incredible, don’tcha think, Bunky? See, the Mad Thinker only hypothesized that such a guy actually existed! He didn’t really know! In fact, his theory was only confirmed when the Puppet Master made a puppet from his radioactive clay and managed to manhandle Xavier into submission! Hoohah! From there it was off to the races and the bamboozled X-Men acted according to their leader’s, uhh, leadership, which was itself marching to a different drummer.

As the dust from the dust-up disappeared, Reed Richards did a little big-brain speculating of his own as he stood over the inert form of his own creation, knocked off its pins by Professor X many miles away. “If the android was beaten the way I suspect he was,” says Stretcho, “the leader of the X-Men is far wiser than anyone dreams!”

Peruse these eye-poppin' publications with Marvel Unlimited right now! Then pick up X-MEN/FANTASTIC FOUR #1 at your local comic shop on February 5!