Next week, it'll be a blast from the past as the Invaders return in an all-new series titled—what else?—INVADERS, that’s what!

Who are the Invaders? Only the greatest Marvel team since Irving Forbush organized a bowling league, bunky! And we’ve got all the important info on ‘em right here, right now! So what’re you waiting for? Invaders…invade!

Okay, we hear ya howling, oh frantic ones, but there’s some truth in it! Way back in 1940, a little gem called MARVEL MYSTERY COMICS #8 started something so simple, yet so sensational, that Marvel’s creators just couldn’t stop themselves. See, the original Human Torch and Namor the Sub-Mariner actually met in the pages of that blockbuster book, and it was the first time any Marvel characters ever crossed over! And the rest is House of Ideas history! 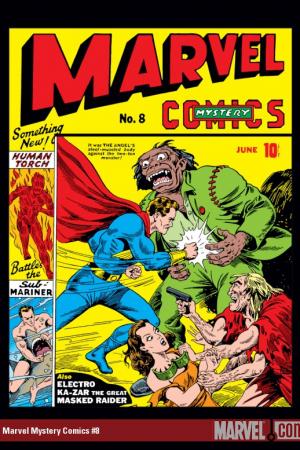 Then, in the year 1946, Torch and Subby had already put their heads together on a few amazing adventures but they hadn't yet met the Sentinel of Liberty himself, Captain America. That all changed in All WINNERS COMICS #19 when those three titans—the original Invaders—teamed up with the Whizzer and Miss America to take down terrors like Isbisa, the Future Man, and Madame Death.

But, when did they become the Invaders, you ask? Read on, as the best is yet to come, Marvelite!

Didja Know… The group wasn't issued the Invaders moniker until 1975?

Rascally Roy Thomas—Marvel editor Stan Lee’s right-hand man at the end of the 1960s and into the 1970s—brought the Big Three of Cap, Torch, and Namor back together in 1969 for a wonderful one-shot in AVENGERS #71 and loved the idea so much he did it all over again in…you guessed it! GIANT-SIZE INVADERS #1 in 1975. His idea sprang from those old ALL WINNERS comics and culminated in a team of heroes that, in the story, were suggested by Winston Churchill himself. Lo and behold, the Invaders were born.

After their dynamic debut, the new-old team—consisting of Cap, Subby, the Torch, Bucky, and Toro—set down roots in their own mag and by the end of their 41-issue run had chalked up an impressive string of World War II-era stories and successes, as well as many more members. Heck, they even inspired at least three different modern-age versions…with one more on the way! How’s that for another peerless plug?

Why should the Invaders have all the fun, eh? That’s what Rascally Roy figured, too, and over the course of his INVADERS invasion he introduced two more scintillating super teams based in the dark days of World War II, just for good measure.

The first one leapt on stage in 1976, in MARVEL PREMIERE #29. Dubbed the Liberty Legion, it boasted the lovable likes of Blue Diamond, Jack Frost, the Patriot, Red Raven, the Thin Man, and the aforementioned Miss America and the Whizzer. The Legion didn’t stick around as long as the Invaders, but they did their patriotic part for Uncle Sam when the old gent needed them most. 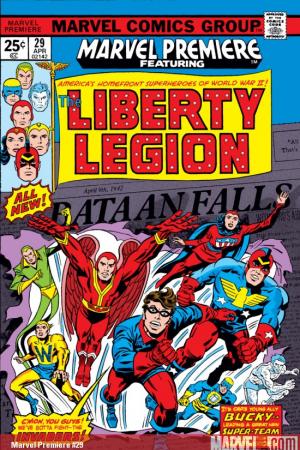 The second of our wartime warriors called themselves the Crusaders and were even more short-lived than the Liberty Legion. In INVADERS #14, the Crusaders claimed Captain Wings, Dyna-Mite, Ghost Girl, the Spirit of ’76, Thunderfist, and Johnny Lightning as mighty members, and though they disappeared as fast as they appeared, the team stood stout and steadfast for the stars 'n stripes!

And now, our Modern Marvel Age of Comics sees the return of the original mighty and motley bunch when INVADERS hits your local five-and-dime next week!

Peruse these eye-poppin' publications with Marvel Unlimited right now! Then visit your local comic shop to read INVADERS #1 on January 16!

Earn Points, Get RewardsJoin NOW!
In this article: Invaders