Hey, you frantic Face-Fronters! You know how the amazing America Chavez’s burnin’ up and down the House of Ideas with her awesome adventures as the modern America, but Didja Know she’s carrying on the legacy of one of Marvel’s historical heroes?

The mighty Miss America, Madeline Joyce, sprang into action back in the days of newsstands and newsie caps, but she immediately broke through barriers as a costumed crimebuster—follow along now and we’ll clue you in to all the pertinent particulars!

During the difficult days of World War II, the racks were top-heavy with him-heroes and light on women warriors, but Miss America upended the stale status quo at the precursor to the modern Marvel, namely Timely Comics. Madeline first appeared in 1943 in MARVEL MYSTERY COMICS #49 in 1943 while the war raged, but after only two issues she graduated into her own title, making her the third Super Hero ever to be honored thusly!

We also have to mention one more fun fact: The cover to 1944’s MISS AMERICA #2 features an actual real-life person dressed up as Madeline—making it not only one of the first times one of our heroes was interpreted in a photograph, but also an awesome early example of cosplay!

When Miss America first made her mark, she exhibited the astounding abilities of self-propelled flight, vivacious vitality…and x-ray vision! Now, very soon after Madeline seemingly lost her see-through sight and in ALL-WINNERS COMICS she was suddenly rockin’ a pair of glasses—odd for a costumed crimebuster! What gave, you ask? Well, back then no one knew! Everybody just rolled with it and didn’t ask questions.

Flash-forward a few years and readers received the news that Miss America’s x-ray vision began to fail her and once it disappeared all-together...left her with the need for prescription lenses! Hey, ya win some, ya lose some! Nevertheless, she still led the way with three different teams—the All-Winners Squad, the Invaders, and the Liberty Legion—specs 'n' all! 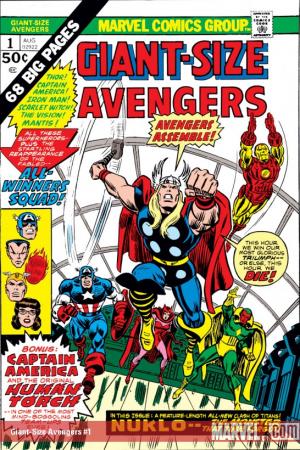 Didja Know… Miss America had a monster for a son?

Okay, bunkies, here’s where the story takes a bit of a dark turn—don’t say we didn’t warn ya, eh?

Marvel mavens learned in GIANT-SIZE AVENGERS (1974) #1 that Madeline Joyce married a fellow Super Hero after the war, a guy named Bob Franks, also known as the Whizzer. They both tried to settle down and got jobs at a nuclear power plant…which, in comic books, is never a good idea.

Long story short, after being accidentally exposed to radiation at the plant—funny how that always happens—the former heroes had a kid and he turned out to be a giant, glowing beast who soon became known as Nuklo! And Madeline perished soon after in the dramatic tale... But, hey, don’t despair! As we said at the beginning, her light-infused legacy continues today in the fantastic fightin’ form of America Chavez!

In this article: Marvel Unlimited