He’s the Monarch of Menace, the Fantastic Four’s Most Fiendish Foe, and the World’s Greatest Super Villain!

Who do we mean? Why, who else but Victor Von Doom himself! And he’s starring in his very own series, appropriately entitled...what else? DOCTOR DOOM!

Let’s turn back the pages of time now and dive into the dastardly early days of this towering titan of Marveldom to catch a rare glimpse of the whys and wherefores of his bonafides… Prepare yourselves, True Believers! What lies ahead is not for the faint of heart!

Didja Know… Doom’s as adept with sorcery as he is with technology?

That’s the funny thing about Vic—everybody ballyhoos his gadgets and gizmos, but they tend to forget he knows his way around a magic spell or three. In fact, his origins are rooted in the mystic and the macabre, from the very beginning way back in old Latveria.

See, the young Von Doom’s parents were European gypsies, as seen in FANTASTIC FOUR ANNUAL (1963) #2, both of them steeped in the traditions of their nomadic people, and both of them specializing in specific ways to use them. His father worked as a healer, seeking to ease his people’s suffering, while his mother…ah ha! His dear mother was known as many things, but suffice to say “witch” seems to be the prevalent moniker for her path in life. 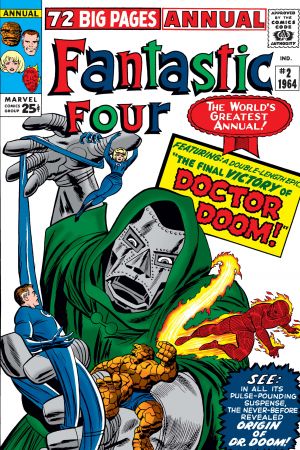 And little Victor? Well, as history howls, he took after his dear mother more than his pops. The boy went on to practice a strange combo of magic and high-tech tricks that not only got him a scholarship to State University in the good ol’ USA, but also blew up in his face—literally—when he pushed the envelope and forgot to lick the stamps! Alas, as Doctor Doom today, he’s still whipping up a sorcerous storm, though his twists on technology will always tend to be his calling card.

Now, we grant it’s as hard to picture ol’ Doomsie as a college student as it is to see him as a tenacious tot, but he did indeed attend college in the States, though it’d prove to be a daunting dilemma for him to collect his piece of foolscap at semester’s end. Let’s stick with that story in FANTASTIC FOUR ANNUAL #2, cleverly called “The Origin of Doctor Doom!,” and you’ll see what we mean...

On that frantic first day at State U, Victor showed off his arrogance to the western world by telling none other than Reed Richards he refused to room with him because—get this—Doom was the superior! Right there and then one of the greatest rivalries the world’s ever witnessed began, as well as Doom’s path to, well, his doom. To sum it up, an experiment in contacting the Nether World through state-of-the-art technology exploded due to the young man’s hubris and Doom was expelled, freshly minted scars and all.

One might argue Doom already knew all he needed to know before attending university or later tripping up the trail to Tibet, and we would not deign to debate that anonymous armchair advocate, but sadly hang our heads over the anger our boy Vic carried away with him, most of it directed at Reed Richards, a guy who coulda been one of Doom’s greatest pals instead of his energetic enemy.

And before breakfast, bunky! Such trivialities are no match for the bombastically burnished bean of Doc Doom! Now if he could only figure out why hot dogs and hot dog buns are sold in mismatched numbers!

So, he had the scars, and the armor, and the castle, and the time machine, but what Vic didn’t have after his terrifying transformation into Doctor Doom was arch-enemies. Oh, and Blackbeard’s treasure, ‘course. In FANTASTIC FOUR (1961) #5, he rectified those little things by attacking the heroes in their headquarters and forcing them to trip through time. And thought nothing of it.

Y’know, anybody else’d invent a time machine and be happy with just that! Not Victor Von Doom, though, nossir—he saw it only as a means to an end, another gadget to advance his gambits for world domination. Huh. He had the power to change the course of history right there in his gauntleted grasp and what did he want? Pirate booty... Sigh!

It’s Time To Return To The Wastelands! 'Marvel's Wastelanders: Doom' Out Now

The History of She-Hulk and Titania

Get to the bottom of the longtime rivalry between Jennifer Walters and Mary MacPherran!