Didja Know... The Weird World of Werewolf by Night

We’re musing on monsters today, Didja Know Diehards, and like the song says, it’s always Halloween somewhere, right? And that makes us think about all those terror titans’ Marvel’s marched out to upon on an unsuspecting world over the years—vampires and zombies and werewolves, oh my!

Hard to imagine these days, but once upon a time such creepy creatures as vampires, zombies, witches, ghouls, and yes, werewolves were verboten in comics! Back in the 1950s, the kooky, crazy Comics Code forbade all frightening fiends from ever gracing the pages of funny books, for fear they might foment nightmares in the sensitive souls of little boys and girls…but in 1971 that all changed, Charlie.

Comics publishers agreed to loosen the reins on the Code and so the floodgates opened and the mighty monster mayhem began—with Marvel in the lead, natch! First to fly in was Morbius the Living Vampire, and that was good, so the very next year in 1972, we opened up Dracula’s tomb, revved up the Ghost Rider’s ride, and intensified the moonbeams for a certain Werewolf to prowl by night! 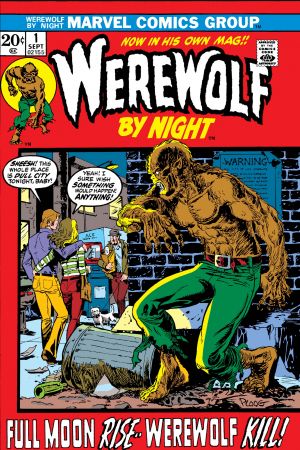 After WEREWOLF BY NIGHT #1, there was no stopping the preternatural parade of horror hosts. The Son of Satan, Frankenstein’s Monster, Brother Voodoo, the Golem, the Living Mummy, and many more macabre misfits made themselves known to comic book fans—a virtual Legion of Monsters!

Didja Know… the Werewolf almost formed a band with others of his ilk?

And what music they might have made, children of the night! Alas, though the Legion of Monsters made for a terrifying title, the original incarnation of that mess o’ monsters only offered one romp to Marvelites…but what a romp it was!

In 1976’s MARVEL PREMIERE #28 a mountain magically appeared in the middle of Los Angeles, prompting four wonderful weirdos—the Man-Thing, Ghost Rider, Morbius, and our hirsute hero the Werewolf—to converge on the amazing apparition and investigate. To say it didn’t go well for them, well, let’s just call that the Mother of All Understatements. 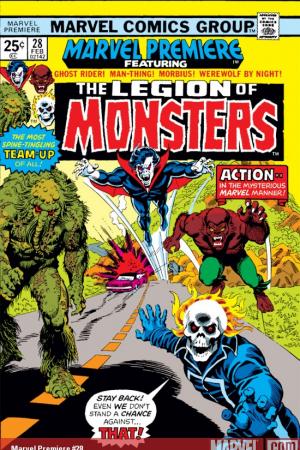 Morbius and the Werewolf attacked the being at the heart of the mountain, the so-called Starseed, and as the golden giant wasted away from the bloodletting, he revealed a significantly sad story: he had the peerless power to cure all the misplaced monsters of their awful afflictions!

Yeah, after that, would you have stayed together to fight crime? We think not.

For a guy who runs around on all fours and bays at the moon at the drop of a bucket of blood, he sure knew how to give others a leg up on fame and fortune! How did he do it? Hey, we don’t ask questions, we just dish out the deets, dig?

In 1974’s GIANT-SIZE CREATURES #1—is that a terrific title or what?—the Werewolf ran headlong into a gal name o’ Greer Grant Nelson who just happen to have made the lucky leap from a costumed cut-up called the Cat to a furious feline titaness designated Tigra. Lucky for both of ‘em, too, ‘cause Hydra needed neutralizing and two snarling stars are better than one! 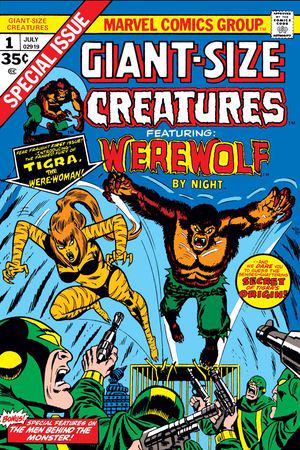 Then, in 1975’s WEREWOLF BY NIGHT #32, a dashing dude with the moniker of Moon Knight made his debut, but as a villain! Yep, it’s true, True Believers; the haunted hero with a heart of gold whipped the Werewolf into a furious frenzy to capture him for his bosses on the Committee and kicked off an incredible run of adventures that’ve lasted to this dazzling day! Who says it ain’t the Marvel Age of Baddies Turning Benevolent? Huh? Who?

In this article: Werewolf By Night

Prepare for ‘Ghost Rider: Kushala’ with Writers Taboo and B. Earl

We speak to the series creators behind Kushala’s Infinity Comics run on Marvel Unlimited.

Earn Points for Marvel Insider This Week with Marvel Contest of Champions and X-Men: Prodigal Son

The stories you can look forward to reading in 2021.