Doctor Strange, the Illuminati, and the Infinity Gems

Revisit when Stephen and other heroes saved the world from behind the scenes!

The idea of a group of people running the world from the shadows goes back centuries. In the Marvel Universe, however, it can be traced back to the days of the Kree-Skrull War as seen in the NEW AVENGERS: ILLUMINATI one-shot from 2006.

That’s about when Doctor Strange, Professor X, Mister Fantastic, Iron Man, Namor, Black Bolt, and Black Panther met to figure out if a behind-the-scenes alliance between them and their respective groups might benefit the world. Panther immediately saw the potential problems with such an idea and quit, but the others stuck together to banish the Hulk to space and branch into a five issue limited series called NEW AVENGERS: ILLUMINATI by Brian Michael Bendis, Brian Reed and Jim Cheung.

Each issue took place around a major event in the history of the Marvel Universe. The first saw our heroes captured by the Skrulls after they tried to invade as a way of keeping the aliens from return trips to Earth. This ill-advised operation actually gave the shape shifters the information they needed to invade during Secret Invasion completely undetected.

In the second installment, Strange attempted to acquire one of the missing Infinity Gems alongside Namor and Professor X. The mission proved a success and between them, they gathered all the stones along with the Infinity Gauntlet. To keep them safe, each member of the Illuminati gained their own, with Strange keeping the Soul Gem. 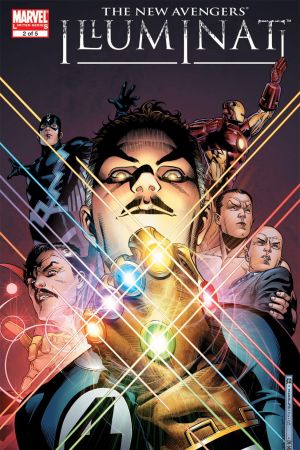 From there, they encountered The Beyonder during Secret Wars II and got him to stop playing with the laws of nature, at least for a bit and then tried to deal with Marvel Boy and his desire to destroy the Earth.

In the fifth and final issue, Tony Stark called another meeting that everyone attended even after World War Hulk and Civil War tore the hero community apart. Strange only appeared in his astral form saying, “I thought it best if there was a barrier between us. All things considered.” Tony wanted to explain to the others about the Skrull invasion as evidence by a Skrull posing as Elektra. As it happened, Strange traveled with the New Avengers when they headed to Japan and encountered the being.

Though he separated from Tony on the Registration Act, Strange returned to the Illuminati as seen in Jonathan Hickman’s NEW AVENGERS and AVENGERS runs that lead up to Secret Wars.

NEW AVENGERS: ILLUMINATI #4 kicked off with Doctor Strange telling Iron Man that Clea left him to rule the Dark Dimension. At that point, she had studied with him to become a mage herself and also discovered that Dormammu’s sister Umar birthed her. She took over in a story from DOCTOR STRANGE #71-74 that ended with her in power and Stephen unwilling to stay on as her consort. In the original comics, this lead into Secret Wars II tie-ins whereas the timing gets reversed in ILLUMINATI.