Donny Cates and Nic Klein’s 'Thor': Where We Left Off

Catch up with the first four Odinson issues before pre-ordering 'Thor' #5!

In the name of honest Irving Forbush: be warned! This article contains spoilers for THOR (2020) #1-4, so read on at your own risk, frantic ones!

The universe is in peril...and that means it must be a Wednesday!

Almost, anyway. But no matter; within the pages of THOR, the stakes have never been higher. Writer Donny Cates and artist Nic Klein kicked off their run with an introduction to the Black Winter—a terrifying threat that caused the destruction of the universe that came before the Marvel Universe we know and love. Only Galactus has ever survived an encounter with the Black Winter.

Now, to save all of existence, Thor must team up with the Devourer of Worlds to face the Black Winter in battle.

On June 24, THOR #5 will pick up from a cliffhanger ending that left both Galactus and Thor dwarfed by the arrival of the coming storm. And if Thor makes it out alive, he may have to fight Galactus as well. Neither option is particularly enticing for the Odinson, but he is all that stands between the multiverse and total annihilation. It’s the beginning of a new era for the Thunder God, even if his future has never been more unclear...

To prepare for the next chapter, Marvel.com is taking a look back at the previous four issues of THOR. So catch up right here, then pre-order the new ish today before it arrives in comic book stores next month!

The Age of Thunder

WAR OF THE REALMS left Thor firmly in charge as the new All-Father and the king of Asgard. In THOR #1, the Odinson was finally out of Odin’s shadow and truly his own man at last. And yet the burden of leadership has weighed heavily on Thor. Even Mjolnir itself seemed to be growing harder to lift, as Thor struggled to adjust to his latest role. 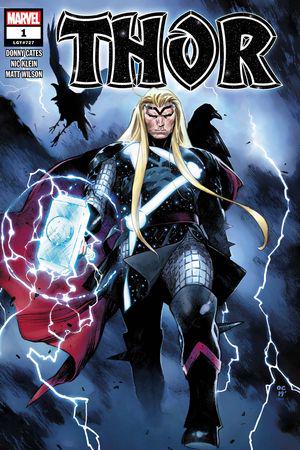 The End of All Things

Galactus literally crashed into Asgard after his second encounter with the Black Winter. After consulting with the Silver Surfer and other former Heralds, Thor agreed that Galactus was still the best defense this universe has against the Black Winter. Towards that end, Silver Surfer agreed to lead Galactus to five previously hidden worlds that would greatly increase his power once they were devoured.

Much to everyone’s surprise, Galactus refused the Surfer’s offer to become his Herald once again. 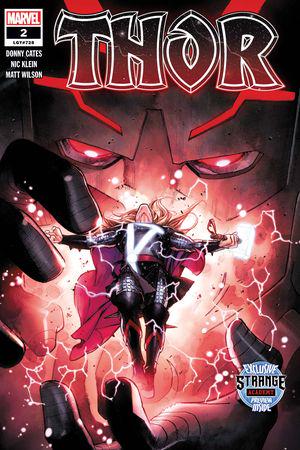 Instead, Galactus chose to give the Power Cosmic to Thor and he completely rejuvenated the Thunder God. For the first time in years, Thor had both arms again and his youthful appearance was restored. But all of those gifts came with a warning. For the Black Winter appears to its victims as the thing that is destined to kill them. Galactus perceived the Black Winter as Thor, and he intends to keep his new Herald “close,” perhaps in a bid to cheat his fate.

Issue #2 offered a peek at another world in the multiverse, so very much like our own. A league of Super Heroes went up against the Black Winter. Sadly, they were easily defeated and destroyed. Meanwhile, Thor clashed with his new master when Galactus attempted to eat the first world without allowing its population to escape.

Thor called for a portal to Asgard, and gave the world’s inhabitants sanctuary until their world could be healed. However, Galactus showed little regard for Thor’s promise when he utterly destroyed their world. Before Thor could challenge Galactus again, Beta Ray Bill arrived to take vengeance against the scourge of the universe.

In times past, Thor and his brother-in-arms, Beta Ray Bill, have been evenly matched. But as of issue #3, Thor’s newfound cosmic might and the power of the All-Father meant that even Bill couldn’t stand a chance. Bill believed that Galactus had corrupted Thor against his will. However, Bill was horrified to learn that Thor freely entered into a pact with Galactus. 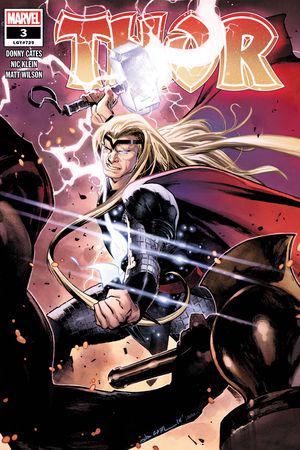 Bill rejected Thor and refused to back down. In response, Thor destroyed Bill’s hammer, Stormbreaker, and prepared to slay Bill as well. But-- BWAAHM!

...Only the timely intervention of Lady Sif saved Bill’s life, as she stood between her king and her friend.

Sif may not be able to match Thor’s power, but her sharp words and deft use of her newfound Bifrost abilities allowed her to defeat Thor without using her sword in issue #4. She successfully took Bill away from Thor without further violence. With Thor by his side, Galactus absorbed the energy of three additional worlds, as the Odinson was allowed to evacuate the native populations to Asgard. 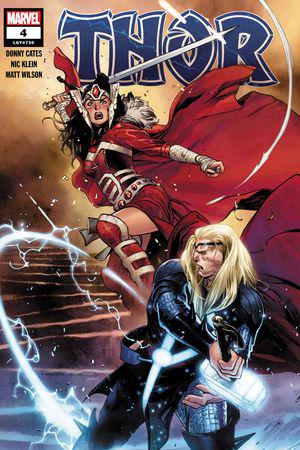 But the people of the fifth world, Kryo, refused to abandon their planet. Instead, they pledged to face the Black Winter alongside Thor and Galactus. Although the new king was moved by the gesture, Galactus was not. The Black Winter’s sudden arrival gave Galactus only a few moments to devour Kryo, but that cost the lives of everyone living on the planet. Thor vowed to make Galactus answer for the lives that he stole. Unfortunately, Thor and his new master have much bigger problems.

The Black Winter has come for both of them.

Find out what happens next by pre-ordering THOR #5 today! Then pick it up at your local comic shop on Wednesday, June 24!

Thor, the God of Thunder, finds himself on a journey unlike anything he's ever faced -- one of self-discovery.