Everything That's Happened in 'Avengers' So Far

Get a recap of all the action ahead of issue #32!

Warning! This article contains spoilers for AVENGERS (2018), so read on at your own risk, True Believers!

Everything's been building to this moment. They've handled Celestials, realm wars, and even vampires, but in AVENGERS #32, Earth's Mightiest Heroes will face the combined forces of everyone who's been moving against them since Jason Aaron and Ed McGuinness launched the series in 2018!

Thanks to Loki's machinations, the new Avengers team came together to stop a group of the angry Celestials known as the Last Host. The team, led by Black Panther, consists of Captain America, Iron Man, Thor, Captain Marvel, Ghost Rider (AKA Robbie Reyes), and She-Hulk.

Additionally, Aaron's been telling the story of the Avengers from One Million B.C. which consists of Odin, Lady Phoenix, Agamotto, a mammoth-mounted Ghost Rider, the Starbrand, Fan Fei the Iron Fist, and the Black Panther. This group's adventures with the Celestials back then paved the way for the current team's mission in issues #1-6, then ish #7 told the tale of the prehistoric Ghost Rider.

The eighth issue mainly set up the Celestial HQ and solidified the team, but also showed a group of Atlanteans attacking a Roxxon ship. When the onboard human soldiers killed the undersea dwellers and hung the would-be pirates off the side of the vessel, Namor attacked with all his might.

From there, the sea king essentially declared war on the surface world, nearly killing former Avenger Stingray with his bare hands and putting together a team called the Defenders of the Deep (in issue #9).

In the landmark AVENGERS #10—actually the 700th issue of the title!—Aaron laid even more groundwork. In addition to showing more of the Defenders of the Deep's exploits, it also established Red Widow as the new leader of Russia's Winter Guard, debuted the Phil Coulson-led Squadron Supreme of America, and featured the Wasp breaking Blade out of Dracula's castle!

After a spotlight on the Iron Fist of One Million B.C. in issue #13, the Shadow Colonel and his Legion of the Unliving launched a war of the vampires against Count Dracula. But instead of entering the fray, the old vampire sought asylum with the Winter Guard! Instead of making a simple deal with the count, Red Widow decided to kill many of his former consorts in exchange for information on how to destroy the Avengers. After getting all they could from him, the Russians agreed to let him have a quiet place to live out the rest of his days...in Chernobyl. This all turned out to be part of Dracula's plan so that he could establish a Kingdom of Vampires while the human forces focused elsewhere (in issues #14-17). 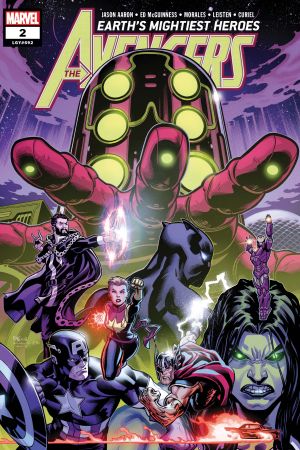 When the War of the Realms finally hit Midgard in AVENGERS #18, the Squadron Supreme of America—Hyperion, Darkhawk, Power Princess, the Blur, and Doctor Spectrum—jumped in to keep Washington, D.C. safe. As the issue progressed, we learned that Coulson could not only alter his team's personalities to a stunning degree, but had also made a deal with Mephisto!

The 19th issue continued under the War of the Realms banner with Gorilla-Man working overtime to protect all of the refugees in Avengers HQ from attack. It also established that the Winter Guard's Ursa Major had been working for T'Challa and the Avengers the whole time. More shocking, however, was the revelation that Gorilla-Man was himself spying on the Avengers for Dracula! The War ended for AVENGERS with mag #20, which focused on She-Hulk's exploits during the conflict.

While most of the team relaxed after the realm war, T'Challa snuck into Phil Coulson's office in the Pentagon (in ish #21). There, he met the Squadron and asked them why they trusted their fearless leader. By issue #22, Robbie Reyes got fed up with the Spirit of Vengeance's erratic behavior and wanted out. A failed exorcism provided by Daimon Hellstrom sent Reyes to Hell where he ran into its newest king, Johnny Blaze. Having replaced Mephisto, Blaze had gone mad with power, but the dead Spirits of Vengeance supported Robbie in his race against Johnny. Eventually, Reyes' Avengers teammates showed up to help him—along with the Cosmic Ghost Rider. In AVENGERS #25, Robbie may have gained his freedom, but Iron Man got transported to One Million B.C.! 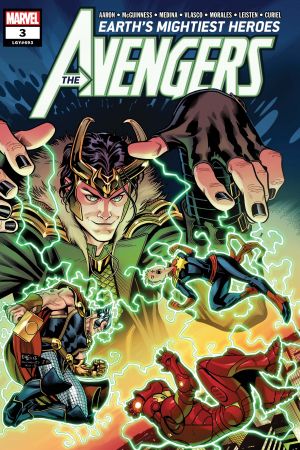 That same era played home to a spotlight on the ancient Starbrand as seen in issue #26 which set the stage for a space adventure that trapped the Starbrand-seeking Avengers in the Ravenstarr Maximum Security Prison Galaxy. While there, they faced any manner of malicious aliens, including a Brood that infected Thor! The team fought Silver Surfer, Terrax, and Firelord as the new host of the Starbrand came to light—a pregnant Earthwoman named Suzanne Selby. Captain America and She-Hulk helped her give birth, but Suzanne did not survive. The others then let the Avengers take the girl, now possessing the Starbrand, back to Earth.

Meanwhile, back in ancient times, Stark met Odin and the other pre-historic Avengers. He'll become the focus of another one-off issue with issue #31, and then AVENGERS #32 will arrive! That issue will find Namor and the Defenders of the Deep plotting the Avengers' destruction along with Phil Coulson and the Squadron Supreme of America, Mephisto, the Winter Guard, and even Dracula!

What will happen to the beloved hero team when all of their most powerful foes come together against them? Find out at your local comic shop on March 11!