Everything You Need to Know About She-Hulk

Jennifer Walters is a lawyer, a warrior, a friend, and a Super Hero! Get her story right here!

She-Hulk AKA Jennifer Walters is not only a super important Avenger AND member of the Fantastic Four, she is also just exceedingly unique. Unlike the Hulk and the Thing, she is PUMPED to be transformed into She-Hulk. Well, not at first, but she quickly becomes one of the few heroes who really seems to love being a hero. She loves being big, green, and powerful. Plus, in my mind, she’s a classic comedy character – not so different from characters like Deadpool. Sure, she’s had a ton of drama, but at her core, I think she is at her best and brightest when she is living her fab single life and fighting weird villains, breaking the fourth wall, and wildly flirting with anything that moves.

Let’s start at the beginning...

She-Hulk was introduced in 1979 in SAVAGE SHE-HULK #1 by Stan Lee, Steve Buscema, and Chic Stone. In issue #2, the book is handed off to David Anthony Kraft, Mike Vosburg, and Chic Stone for pretty much the remainder of that 25-issue run.

Jennifer Walters was raised in Los Angeles by her father Sheriff Morris Walters and her mother Elaine Banner-Walters, who died in a suspicious accident. During this time, she became close with her cousin Bruce Banner while spending summers in Ohio. She went to UCLA’s law school and became a lawyer to fight baddies like her dad.

We first meet Jen while she’s investigating the bad dudes who killed her mom including Nick Trask, whom Jen was defending after he framed his personal guard for murder. Trask put the hit out on her and she gets shot. But Bruce happened to be visiting from New York City, and when Jen needs an immediate blood infusion, he was the one to help out – turning her into She-Hulk.

In issue #2, the book immediately gets weirder! Jen spends her early days as a lawyer trying not to get pissed off in court and splitting out of her clothes and murdering her opposing counsel. Initially, she can’t control her powers but in time, she is able to keep her Jen Walters brain while in her She-Hulk form. Things are complicated because her dad is a cop and she is becoming a vigilante – whether she really wants to or not. She spends most of the run having awkwardness with her dad and honing her control of the She-Hulk inside.

Jen makes some key connections during this time with Man-Wolf AKA John Jameson and Patsy Walker in issue #13. Her friends Zapper and Richard Rory both sought her attention and helped her out. She eventually chooses Zapper’s dapper ‘80s ‘stache and large head of curly locks.

Almost every issue of SHE-HULK introduces a new D-lister, like Howard the Duck and Man-Thing. It’s delightfully weird.

The series wraps up with She-Hulk reconnecting with her father who didn’t know she was She-Hulk and realizing that she loves Zapper.

DRAMA FOR YOUR MAMA: She-Hulk in the Avengers and the Fantastic Four

She-Hulk starts to move from her dramatic origin to being an important part of Marvel’s biggest Super Hero teams. But it seems like she really can’t escape ongoing relationship drama. She joins the Avengers in 1982 in AVENGERS #221-242 by Jim Shooter, David Michelinie, and Bob Hall alongside a super team of artists. 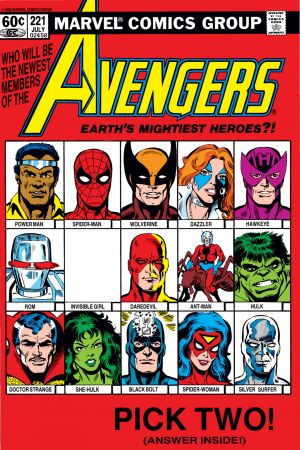 Janet Van Dyne AKA the Wasp puts an ad in the paper asking for the female heroes to find her: Black Widow, Dazzler, Invisible Woman, Spider-Woman, and She-Hulk.  On the way there, Jen rear-ends Clint Barton in her pink convertible, setting up animosity between the two of them and a lot of back-and-forth.

In AVENGERS #228, Shocker shocks Jen so badly that she can’t hulk out – until Clint talks smack and she slaps him until she hulks out again. Go figure, around issue #242 Hawkeye proposes having “detached members” who are on call instead of full-time and She-Hulk says “Indeed!” and disappears from following issues.

She-Hulk is the muscle for the Avengers and largely the comic relief. She runs around in cut-off shorts, lifting up cars and huge machines like they weigh nothing, and then dives into fights with fists flying. Plus, she’s got mad swag. She’s really sexy, single, and loving her life. This run is especially important because She-Hulk’s flirty, fancy-free personality really starts to take shape in the absence of dad/boy drama.

She-Hulk later pops in 1984’s SECRET WARS. This is the beginning of her ongoing battle with Titania, who immediately wants to fight her after being turned into a buff lady by Doctor Doom. She-Hulk tends to fight other big ladies like Titania and Thundra, but from the beginning she’s really just always been fighting the weird guys like Mole Man, Doctor Bong, a real ever-changing rogues’ gallery that is delightfully strange.

This is also when Ben Grimm AKA the Thing leaves Earth for Battleworld (where he can stay in his human form) so he recruits She-Hulk to be the muscle for the Fantastic Four while he’s away. She-Hulk returns to Earth in FANTASTIC FOUR #265-300, which was written and drawn by John Byrne, one of the most iconic creators of the character. During this time, Sue Storm is pregnant with Franklin, so She-Hulk doing double duty as a foil to Reed Richards and punching stuff.

Around this time, She-Hulk meets Wyatt Wingfoot and there is CHEMISTRY! He keeps popping up from time to time until we they start dating. So, remember when Johnny Storm wanted to marry Alicia Masters? Well, She-Hulk was PISSED because Johnny also asks Ben to be his best man. She-Hulk and Thing fight in a construction spot until he feels better. Jonny and Alicia get married and since Ben is back, Jen’s out!

SHE-HULK loves to HULK! (PLUS SHE IS THE ULTIMATE FUNNY GIRL)

She-Hulk returns to the Avengers in AVENGERS #278-297 by Walt Simonson and John Buscema. This is pretty much a continuation of the previous run, but fun things happen, like she encourages Captain Marvel AKA Monica Rambeau to lead the Avengers. But she ultimately leaves because she feels weird about the stuff she did while controlled by Nebula (a different one) and Doctor Druid. She exits with the Avengers’ blessing.

In 1989’s SENSATIONAL SHE-HULK by John Byrne Bob Wiacek and Glynis Oliver (with a few issues by Steve Gerber and Bryan Hitch), she fully embraces her comedic nature. She starts breaking the fourth wall on the cover of issue #1. When we meet her, she’s enslaved by the Ringmaster, but she breaks free from his mind control and heads back to New York City. Janet Van Dyne hooks Shulkie up with her apartment while she’s away visiting Hank Pym in Los Angeles. Jen also starts a new job – while stuck in her big and green form. 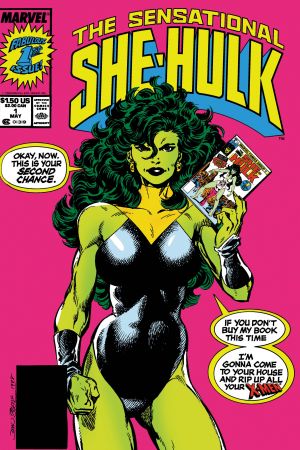 This is where she meets her new bestie Louise “Weezi” Mason AKA the Blonde Phantom from the old days of Timely Comics. They both work for District Attorney Towers, and we get a look into Weezi’s past when she and Mr. Mason got married and grew older while not in comics; now she’s a middle-aged widow ready for adventure.

Jen often pulls in her editors, creators, etc. Into the actual comic book as the run goes on, like when she nearly jumped out of the pages to fight John Byrne for making DA Towers married in the book. Among Shulkie’s other fun times, she fantasizes about Hercules and we see some flames with Wyatt Wingfoot. She also comes across a ‘59 Dodge convertible with space travel capabilities courtesy of some friends from space. Jen continues to help out the DA during the day, and she and Weezi travel the world fighting weird villains and having adventures.

The covers for this series are utterly fantastic and capitalize on She-Hulk’s humor, with lampoons of sexy covers accompanied by her realistic commentary. Editor Renee Witterstaetter later appears to chat with her on the page. The series ended because John Bryne “died by tripping over a subplot.”

BALANCE IS BEST FOR SHULKIE

In 2004’s SHE-HULK by Dan Slott and artists Juan Bobillo and Paul Pelletier (who also kicked off the 2005 that was taken over by Peter David and more artists), She-Hulk gets kicked out of Avengers Mansion for too many overnight guests. The reason cited was that they were security risks, plus she gets fired for causing a mistrial at her law office and photocopying her butt – on a color copier. 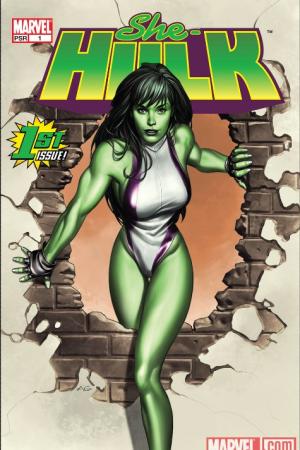 Jen she moves out and gets a job working for Goodman (Martin), Lieber (Stan), Kurtzberg (Kirby), and Holliway – her boss, who thinks She-Hulk is a liability and wants Jen in the courtroom. Jen doesn’t love being in her vulnerable form, plus she is faced with working with (and against) fellow litigator Mallory Book. She also enlists the help of Augustus “Pug” Pugliese who is into her. The series explores her reclaiming her power in human form and fighting for super-powered clients who aren’t heroes and need help. She also ends up eloping with Man-Wolf, her on-and-off squeeze for ages. This run is delightful because we get our classic flirty and fabulous Shulkie, who has really heartfelt drama helping super people who don’t want their powers.

More She-Hulk highlights include the Contest of Champions, when Gamora trains her. She also becomes roommates with Lyra, She-Hulk from another universe. In Charles Soule’s 2014 run of SHE-HULK, she gets to use super detective skills. She was also a big part of PATSY WALKER AKA HELLCAT.

Then CIVIL WAR II happens – the initial conflict with Thanos leaves her in a coma. She wakes up in 2016’s HULK by Mariko Tamaki and Nico Leon, is grey and royally screwed up, dealing with her lingering issues and watching baking videos to cope.

Now she’s back in green and buffer than ever!

You can catch up with She-Hulk on Marvel Unlimited in all the issues mentioned here, plus she’s been fighting alongside the Avengers again!

You can also listen to the full conversation about She-Hulk on the latest episode of This Week in Marvel!