Examining Thanos and Gamora's Complicated Past

Read 'Thanos' #1 as we look back at the Universe's most difficult father-daughter relationship.

Between the cinematic conclusion to the Infinity Saga and the brand-new THANOS comic, more people than ever want to dig into the history between Gamora and Thanos. So, a-digging we shall go!

In her earliest appearances in the pages of STRANGE TALES and WARLOCK, the most dangerous woman in the universe was dead set on destroying Adam Warlock's evil-future-self, Magus, and the Universal Church of Truth for wiping out her people. To reach that goal, she began traveling with Adam's friend Pip the Troll and eventually came face to face with Magus himself.

During that encounter—seen in WARLOCK #9—she mentally reached out to her master for orders. The unseen force told her to wait and follow their plan, for the exact moment to strike. When the time came for her to lash out with a specially designed dagger that could kill even the Magus, the villain knocked her aside with ease. That failure made Gamora's master reveal himself, thus entered Thanos!

Over the course of the next two issues, Gamora, Thanos and Pip all worked with Warlock to defeat Magus. The Mad Titan would eventually explain in WARLOCK #10 that he planned on ruling Titan in the future and that the Magus could stand in his way. So, he used a time machine to learn everything about both Magus and Warlock. 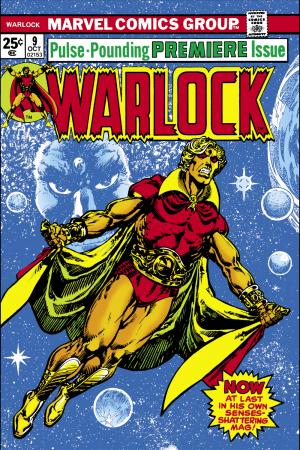 He then recounted her very origin story, recalling that he found her among her people, the Zen Whoberis, in a future already ruled by Magus. Because they refused to convert to the Universe Church of Truth's teachings, the Zen Whoberis were all wiped out except Gamora. Thanos sensed her hatred and plucked her out of time. He then raised her on his ship, the Sanctuary, for the sole purpose of killing Warlock/Magus. He trained her in the art of war and upgraded her physically so that she could take on the dark being.

Thanos even allowed her to kill those who would destroy her people years before the event actually happened. However, this did not stem from a sense of loyalty, but instead a hope that it would wreak havoc on the Magus' time stream, allowing her the chance to kill Magus. Since that failed, other plans had to be put into motion. In the end, Adam Warlock ended and restarted reality so that Magus never existed in the first place, but Gamora and Thanos still remembered. At the end of issue #11, they went off to continue plotting.

(This rearranging of reality shifted a few of the details in her past. In her 2016 self-titled limited series, a 20-something Gamora remembered the day the Badoon destroyed her people as the same one when Thanos saved her. It also firmly established that Nebula also grew up alongside Gamora.) 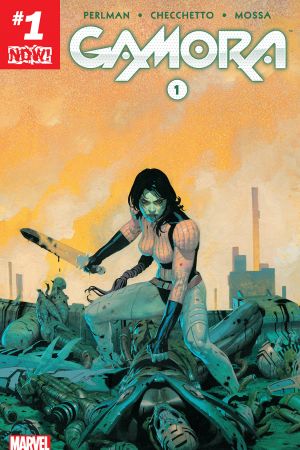 Gamora next showed back up again in WARLOCK #15 telling Thanos that watching him work was utterly boring. He then sent her off to keep tabs on Adam Warlock as a kind of bodyguard. The Titan felt freer once she left because he knew Gamora would leave him if she found out about his plans for total stellar genocide. However, Gamora never quite made it to Warlock as Drax the Destroyer, intent on killing all things related to Thanos, blew up her ship.

Gamora's fate remained a mystery until AVENGERS ANNUAL #7 in 1977 wherein she told Adam Warlock that she'd uncovered Thanos' plans for murder on a cosmic scale. When Gamora confronted her surrogate father with the news, he attacked and left her for dead. After hearing what she had to say, Warlock transported her to Soulworld, contained inside the Soul Stone on his forehead.

And there she stayed until the early '90s! First, Silver Surfer visited Soulworld and then Thanos' acquisition of the Infinity Stones in INFINITY GAUNTLET necessitated her return to the physical plane. Though briefly snapped out of existence by Thanos, she returned when Nebula got her hand on the Gauntlet.

Gamora then became the keeper of the Time Gem as part of Infinity Watch, a group that Thanos was also secretly a part of. Over the course of the next two decades she re-established her title as the deadliest woman in the galaxy, agreed to fight the Annihilation wave with Ronan, helped fight off Ultron and the Phalanx in ANNIHILATION: CONQUEST, and became a founding member of the new Guardians of the Galaxy! 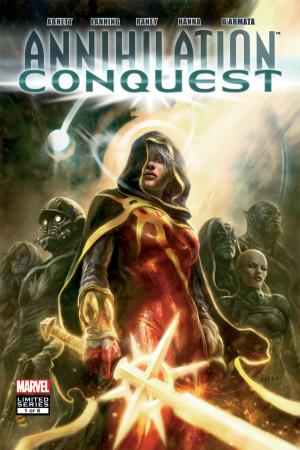 During her tenure with that crew, she came up against the Magus once again. She also assisted in capturing Thanos and even fighting alongside him briefly before he betrayed them all in THE THANOS IMPERATIVE.

More recently, in the pages of INFINITY WARS, Gamora finally succeeding in killing her father, thanks to a special suit of armor and the stolen Power Gem. However, she was still plagued by visions of him and worried about becoming too much like her departed dad in her own search for the stones.

These days she's dealing with the repercussions from all that in the pages of GUARDIANS OF THE GALAXY where some groups want her dead and others are trying to figure out who the next Thanos will be! No matter the outcome, we predict that any relationship there will be complicated.

Read these issues and more on Marvel Unlimited now! Then pick up THANOS #1 at your local comic shop for more about Gamora and Thanos' history!

In this article: Thanos, Gamora

The Styles of Starfox

Meet the Eternals golden boy known as Starfox —Thanos’s fun-loving brother who was born to redeem the family’s legacy. No pressure.

Every Ghost Rider Ever

Johnny Blaze, Danny Ketch, Robbie Reyes, and so many more. Beware the Spirits of Vengeance…