See how a Kree warrior went from spying on Earth to protecting it!

For legions of readers, the name Captain Marvel instantly leads to images of Carol Danvers flying around, punching bad guys and being generally awesome. However, as many longtime fans know, she’s but the latest in a line of characters to use that name at the House of Ideas.

The first debuted in 1967’s MARVEL SUPER-HEROES #12 by Stan Lee and Gene Colan. Seeing as how Carol teamed up with the earlier Captain Mar-Vell in this week’s GENERATIONS: THE MIGHTY, it seemed like the perfect time to look back at the latter’s origins. 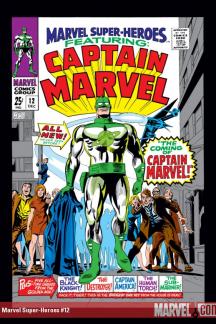 As the issue opened, a Kree ship approached Earth with Colonel Yon-Rogg in charge. He ordered Captain Mar-Vell to head planetside even though it flew in the face of protocol. Even though he and his medic-girlfriend Una thought the colonel planned on betraying Mar-Vell, he did his duty and continued on the mission.

Decked out with a protective green and white suit, emerald helmet, air-ject belt, universal beam blaster and a potion that allowed him to breathe Earth air for an hour at a time, the captain leapt into action.

Thanks to his own remembrances, we came to understand what brought him to Earth: the destruction of Kree Sentry #459 as seen in the pages of FANTASTIC FOUR #64 plus Ronan’s defeat by the FF in the following issue! 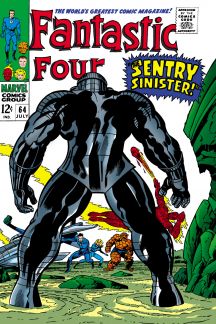 Almost immediately, Mar-Vell stumbled upon a missile test that went sideways. While searching for the cause of the failure, the operators quickly discovered Cap’s presence and set out to investigate. Not wanting to threaten his mission, he ran away, changed into Earth clothes, hitched a ride and got himself a room at a nearby hotel.

There, the colonel teleported a wrist monitor onto Mar-Vell. He then received a message from the Imperial Minister of the Supreme Intelligence that he would be the new Kree agent on Earth. Only success would be tolerated, failure would result in death.

Literally flying solo on a strange planet with no back-up, Captain Mar-Vell continued his adventures in the following issue, written by Roy Thomas where he not only took on the identity of Walter Lawson, but also met Carol Danvers in her first appearance. From there he transitioned into a solo series, CAPTAIN MARVEL, which ran from 1968 to 1979. Three years later, in MARVEL GRAPHIC NOVEL: THE DEATH OF CAPTAIN MARVEL, the world lost a hero as the Kree warrior succumbed to cancer that started developing thanks to his battle with Nitro in CAPTAIN MARVEL #34. 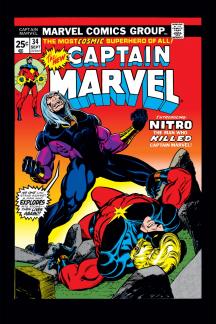 Not counting time travel and Vanishing Points, Captain Mar-Vell continues to be one of the few dead heroes who hasn’t come back. During Civil War, though, it seemed like he’d come back from the dead as seen in CIVIL WAR: THE RETURN. That version of Mar-Vell continued on in five issue CAPTAIN MARVEL series which eventually crossed into Secret Invasion and revealed that the Skrull Khn’nr had been masquerading as the beloved character. It turned out that his mental programming failed and the Mar-Vell identity actually took over, so even after learning the truth about himself, he remained loyal to Earth and fought against the Skrulls. After fighting a losing battle that eventually killed him, he crossed paths with Noh-Varr and encouraged him to carry on the legacy of Captain Marvel which he did in the pages of DARK AVENGERS.

In this article: Civil War