Follow-up Dead Man Logan #1 with a look at the storyline that introduced the character!

Old Man Logan may have gotten a new lease on life thanks to the reality-shifting events of SECRET WARS, but that's all coming to an end with this week's launch of DEAD MAN LOGAN #1 by Ed Brisson, Mike Henderson, and Nolan Woodard.

With the alternate reality version of Wolverine potentially meeting his maker, it seems like the perfect time to look back at the character whose first official appearance came about in WOLVERINE #66-#72 and WOLVERINE GIANT-SIZE OLD MAN LOGAN #1 by Mark Millar and Steve McNiven.

In that series, we met a grayed version of Wolverine in a future where the villains took over. He lived a quiet life on a ranch in California with his wife Maureen and kids Scotty and Jade, but seemed to have forsaken his old ways and even cow-towed to the local heavies, otherwise known as hillbilly Hulks.

When the Hulks demanded payment, a Logan who decided not to use his claws went on a mission with Hawkeye to deliver what turned out to be Super-Soldier serum to New Babylon (formerly Washington, D.C.). Filled with surprise attacks and shocking reveals, Logan eventually made his way back home, only to find his family murdered. After slicing and dicing his way through the Hulks, he fought Bruce Banner to the death only to discover a baby Hulk called Bruce Banner, Jr. who he took under his wing, vowing to take down the rest of the villains controlling his world. 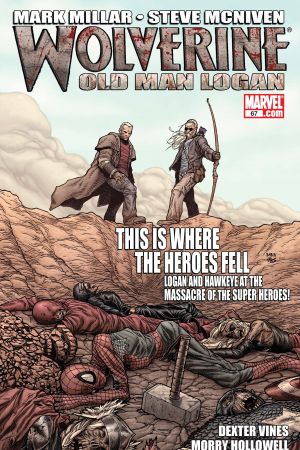 So, what turned the fiercest fighter in the Marvel Universe into a guy who would sit back and let all this happen? Well, before all of this, as part of the Super Villians' initial attack, they sent Mysterio to the X-Mansion where he made Wolverine think that he was taking on an army of villains...when in reality he was murdering all of his teammates.

The character made his way through the Wasteland for a while, but eventually got wrapped up in SECRET WARS like so many other characters. In that five-issue limited series, Logan found himself part of Battleworld and went on a tour of the cobbled-together place much to the chagrin of a Thor Corps member who continually tried killing the one-time Wolverine. 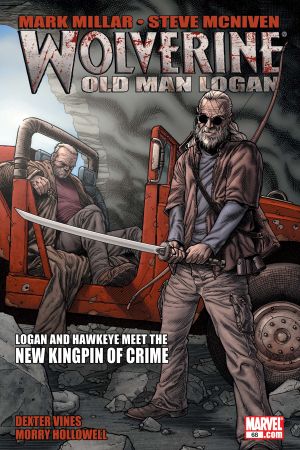 At the end of that event, Old Man Logan awoke stranded in a strange reality. Kicking off his first full ongoing series, our hero began a mission to take out some of the villains who lead to his future's creation. However, the more he interacted with the denizens of this reality, the more he came to realize that this past wasn't the same as his own.

That didn't stop him from mixing it up with plenty of villains over the course of his 50-issue solo series. Shepherded by Jeff Lemire and then Ed Brisson, Logan got into it with Lady Deathstrike, Dracula and even Kang the Conqueror. 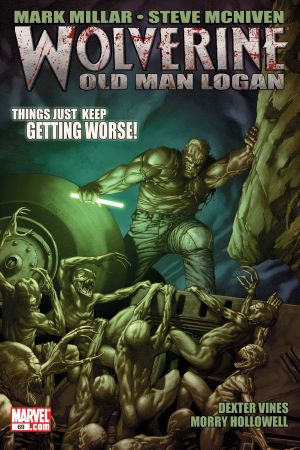 Old Man Logan didn't just keep to himself, though. His appearance in this reality coincided with the death of Wolverine, meaning teams needed a berserker with claws and a healing factor. He first began hanging out with the X-Men again in EXTRAORDINARY X-MEN (also by Lemire). From there he became a major player in the Marvel Universe, showing up for all major crossovers and even starring in team books like WEAPON X, X-MEN GOLD, ASTONISHING X-MEN, PHOENIX RESURRECTION: THE RETURN OF JEAN GREY, and EXTERMINATION.

We mentioned that Old Man Logan's first official appearance came in WOLVERINE #66, but he has roots that may or may not go back to 2008's FANTASTIC FOUR #558-#562 by Millar and Bryan Hitch. In that book, a group of heroes from an alternate future called the New Defenders use Galactus to power a time machine to make their way to the then-present. 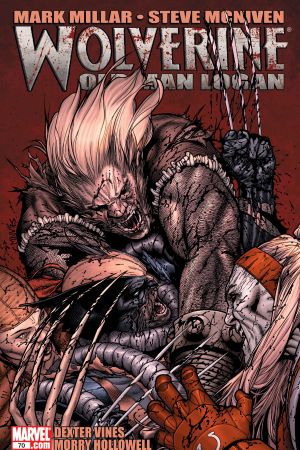 Two of the members include a claw-popping fellow known as the Hooded Man and a new Hulk. The former eventually revealed himself as Wolverine and Hulk referred to him as dad. Could this be Old Man Logan from even further down the line, or is he from a different time-line altogether?